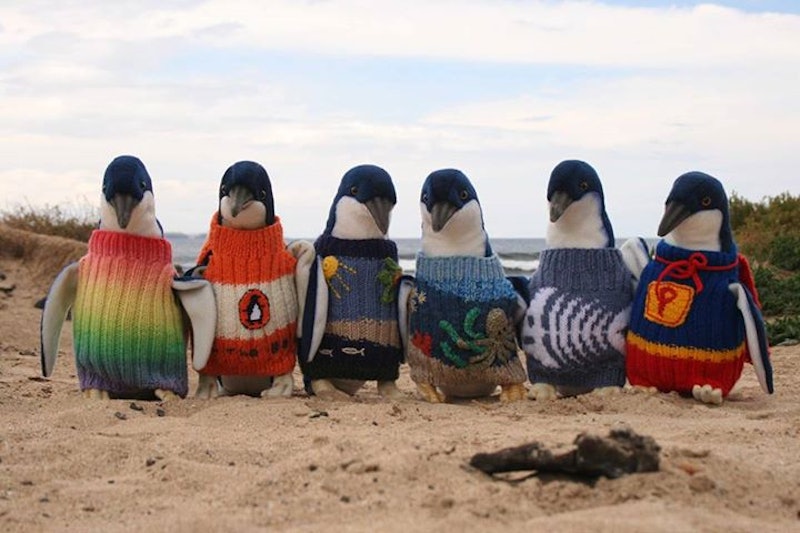 First, the good news: In case you forgot, there are lots of very cute penguins in Australia. You might remember last March when Knits For Nature called for people to make knitted sweaters for penguins to protect them against oil spills, particularly the penguins near Phillip Island in Australia, who are still recovering from an oil spill in 2001. Fortunately, the call was more than answered, but never quite so adorably as when it was answered by Australia's oldest man, 109-year-old Alfred Date, who just started knitting penguin sweaters and evidently has a real knack for it.

Not that it's a huge surprise: Date has been knitting now for over 80 years, starting the day his sister-in-law handed him a pair of needles and asked him to make a jumper for his then-unborn nephew. He had only spent a day in the retirement home he recently moved into before the nurses sought him out, having heard tell of his knitting abilities, eager to put him to work to help the penguins.

"The girls who used to work for me, they'll tell you I'm a sucker. I can't say no," said Alfred to NineMSN. "It's a good way of getting along in life. You make friends all the time but you don't make a fool of yourself either."

The sweaters are necessary for keeping the penguins safe because they like to preen, which rubs harmful leftovers from oil spills all over their bodies and gets into their digestive systems. But with awesome knitters like Alfred Date on the case, Phillip Island Nature Park has been able to save 96% of the penguins affected by the spill. Here are some sweaters like the ones Alfred Date is making. I hope I will be able to make someday, because I have just decided I want to be him when I grow up (if I am lucky enough to be as awesome at life as he is when I'm 109 years old).