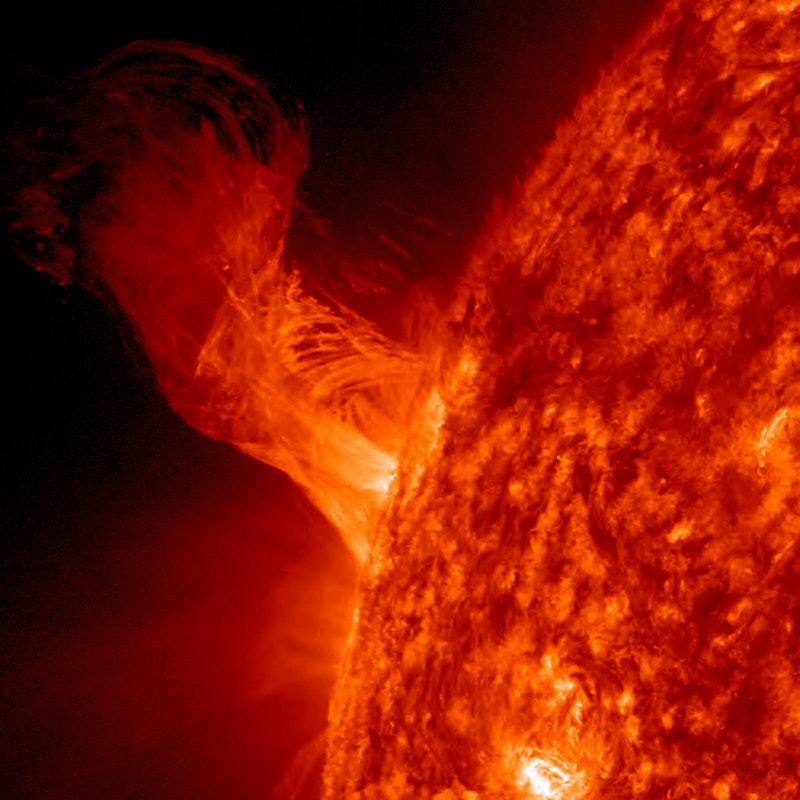 If you were really immature (i.e., me) you'd watch this video NASA just released of 5 years worth of sun explosions and immediately giggle because the sun is made out of gas, so sun explosions are just space farts as far as you're concerned. If you were more mature (i.e., you, occasionally me), you'd be awed by the immensity of the universe, the small insignificance of yourself, and the beauty of our solar system. The video was released to commemorate five years in space for NASA's Solar Dynamics Observatory which is responsible for 24-hour surveillance of the whole sun. So far, in that time, they've taken around 200 million images of the giant, glowing, gaseous orb that sustains us.

Capturing an image more than once per second, SDO has provided an unprecedentedly clear picture of how massive explosions on the sun grow and erupt ever since its launch on Feb. 11, 2010. The imagery is also captivating, allowing one to watch the constant ballet of solar material through the sun's atmosphere, the corona.

In honor of SDO's fifth anniversary, NASA has released a video showcasing highlights from the last five years of sun watching. Watch the movie to see giant clouds of solar material hurled out into space, the dance of giant loops hovering in the corona, and huge sunspots growing and shrinking on the sun's surface.

The imagery is an example of the kind of data that SDO provides to scientists. By watching the sun in different wavelengths – and therefore different temperatures – scientists can watch how material courses through the corona, which holds clues to what causes eruptions on the sun, what heats the sun's atmosphere up to 1,000 times hotter than its surface, and why the sun's magnetic fields are constantly on the move.

Watch the beautiful and terrifying video below.

Fascinating, right? Here are 5 facts about the sun to blow your mind even further:

1. Light created by the sun takes eight minutes to reach us here on Earth (which means the sun is BIG and worryingly CLOSE).

2. Speaking of big, one million earths could fit inside the Sun. YOUR MIND: IS IT BOGGLED YET?

3. Over the course of a year, the distance between the sun and the earth varies. It can be anywhere from 147 to 152 million kilometers away.

4. After it's "red phase" the sun will collapse to become roughly the size of the earth, which is it's "white dwarf" phase. Cute!

5. Eventually, the earth will consume the sun. You'll be long gone though, so don't stress.