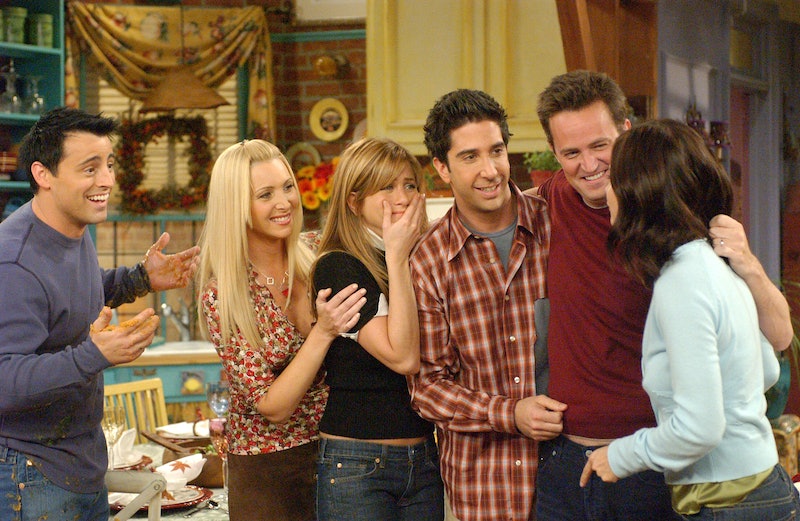 Well, it's official: Kendall Jenner is everywhere. The second-youngest member of the Kardashian clan has moved far past just appearing on the family series, having spent the last year walking in designers' shows, modeling for magazines, and generally taking the fashion world by storm, all while keeping up (get it?) a reputation brighter than those of her better-known sisters. It seems that no one is immune to her charm, from Karl Lagerfeld to Anna Wintour to... Marcel the monkey? Yes, as strange as it might seem, the capuchin from Friends ' season 1 is the latest star to appear alongside Jenner, in a shoot for the March cover of Allure .

In the photos, the 19-year-old is shown happily posing with the monkey (real name Katie), who the magazine identifies as the "actor" behind one of TV's most famous pets. Why is Jenner holding Marcel? Who knows. The point is, it's amazing, and I can't help but wonder what the rest of the Friends cast would think about the event. Would Ross be angry? Would Joey be jealous? Would Phoebe even know who the Kardashians are? Here's what I imagine the Friends crew would think about the reality star family today:

He pretends not to know about the Kardashians, but he totally does, always "glancing" at tabloid magazines every time he goes to the doctor. He thinks it's dumb and unimportant, but if you get a few drinks in him, he'll suddenly start utilizing the word "momager" and arguing that the Kim-Kris marriage was a total sham. Kendall is his favorite, but he refuses to admit that because of the whole "remember when you dated a teenager?" thing.

As for Marcel posing with Kendall, Ross isn't too happy about it — he was never thrilled with Marcel's Hollywood career, but as it seems to bring the monkey happiness, he supports it anyway. Besides, now it's like he hung out with Kendall, too, kind of... right?

Joey knows nothing about the show, but he loves some of the family members individually. He has strong opinions on Kim's butt, "likes" all their Instagram posts, and once got yelled at by Bruce Jenner for hitting on his then 16-year-old daughter. He didn't know!

Chandler says he knows nothing about the show, and rolls his eyes every time anyone (aka: Rachel) brings it up. Who cares about some random, talentless family? One day, however, he stays home sick from work and ends up marathoning the entire ninth season. He tries to hide his addiction from his friends, secretly watching the show on his laptop while in the tub, but eventually he's caught by Joey. At first, Joey makes fun of him, but soon he becomes addicted, too, and joins Chandler's secret binge-watches. It all culminates when Monica walks in and finds the two of them curled up together, watching Kim and Kayne's wedding for the fifth time. She brings in the others to laugh at the duo, but the episode ends with all six friends glued to the TV, unable to concentrate on anything else.

Rachel is an unabashed Kardashian fan, of course. She knows everything about the family, and once sold a dress to Khloe (it was amazing.) None of the others will listen to her rants over Scott's behavior or how Kris Jenner acted in her dream, but that doesn't mean she doesn't still let it out. She tries to get onto Marcel's photoshoot with Kendall as an "assistant," but much like with Joey's soap opera visits, she acts insane and gets banned from the set.

Monica prefers real TV to reality, but she ashamedly admits she knows a thing or two about the family (a fact she blames entirely on Rachel, as if those tabloids she's browsed on the grocery store line haven't taught her anything). She just doesn't get it, and spends hours obsessively figuring out why the Kardashians are famous, getting lost in Google searches and waking up in the middle of the night because "isn't it strange that nobody knows what Scott Disick actually does?!" Chandler is not amused.

Phoebe has no idea who the Kardashians are, at least until Chandler's slip-up. Once she does, though, she thinks they're ridiculous, and uses their similar-sounding names as inspiration for her new songs. She once gave a massage to Kourtney, although she didn't know who the star was, a fact that Rachel doesn't understand and will never let go of, ever.

Marcel's Hollywood career is going wonderfully. He works with movie stars, is treated like a king, and gets to pose with pretty girls who think he's adorable and feed him treats. Marcel is living the dream, at least the capuchin-monkey version.