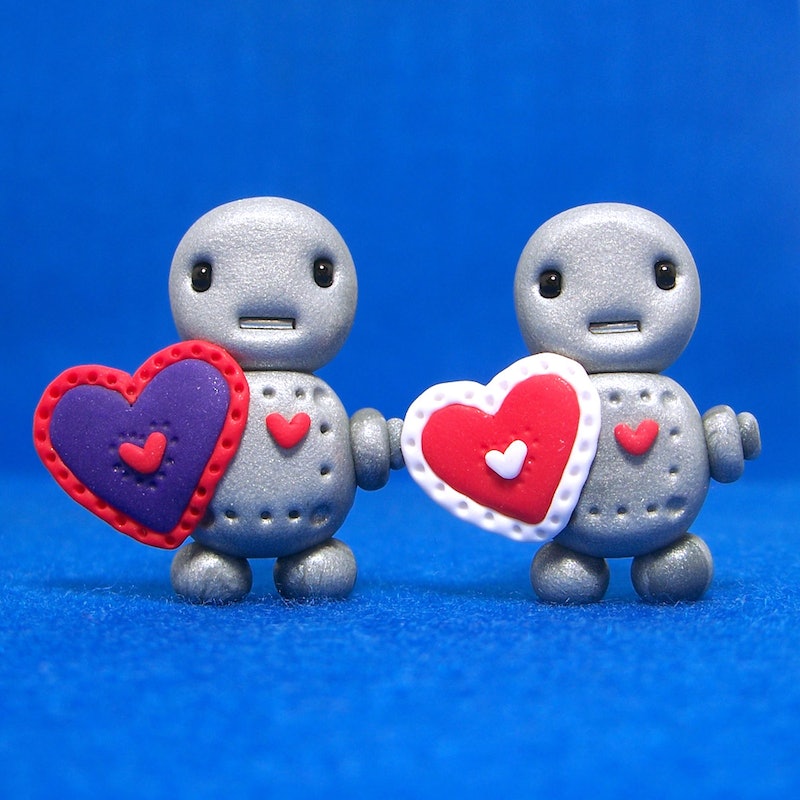 Do you have a crush on someone, or do you suspect someone has a crush on you? Sure, you could always just ask them out—or you could get the Twitter account CrushBot (@crshbot) to do it for you. CrushBot's sole purpose in life is to play Cupid by digitally connecting you with your online crush and vice versa. Yes, it's a gimmick—as the Daily Dot points out, it was created by New Inquiry's Division of Special Products to shill a really weird limited-edition tote bag — but it's a pretty good gimmick, and well-timed, as well. Happy Valentine's Day! Or… something.

I'm sure a lot of us have middle school memories of Valentine's Day “secret admirer” deliveries: On February 14th, a handful of volunteers would swoop through the cafeteria during lunch, doling out colorful carnations to select students along with the message that someone had a crush on them. Everyone else usually tried to pretend that they didn't give a damn about cheap flowers and Hallmark holidays; meanwhile, though, an awful lot of them were also probably secretly wishing someone had spent a dollar of their hard-earned allowance on them. Ah well — at least most of those seventh grade romances don't typically pan out in the end, right? Unless you're Cory and Topanga, that is.

I see CrushBot kind of like the modern day equivalent of those carnations; it just uses Twitter as its messenger instead of your 12-year-old classmates, and it doesn't actually involve any flowers. It's simple to use: All you need to do is follow it, wait for it follow you back, and then send it a direct message containing up to five other Twitter user names. If any one of those five people also goes through the whole “follow, wait, DM” dance with CrushBot, it'll send you both a private message.

The flaw, of course, is that CrushBot requires both parties to use it in order for it to work. It's highly likely that you'll send your message out into the ether… and then just sit there, waiting for a reply that never comes. From what I can tell, though, CrushBot may take a little initiative to make it happen; its public feed is full of tweets like this:

My guess is that when you DM your five Twitter handles to Crushbot, it tweets the above message to each of them. This, in turn, might prompt them to go through the motions themselves.

Alas, though, it appears that CrushBot is offline for now — according to this tweet from last night, Twitter has put a stop to it for the moment:

I'm not totally sure why this is the case; maybe it got classified as spam or something. At least the account hasn't been suspended… but I can't help but think that maybe Twitter's time would be better spent stopping actual abusers than a fun little Valentine's Day bot.

But hey, it was good while it lasted — and the fact that CrushBot hasn't been suspended is promising. Maybe it will rise from the digital deep, carnation in hand and chocolates at the ready, taking up its mantle of loving connection once more. Follow it @crshbot.