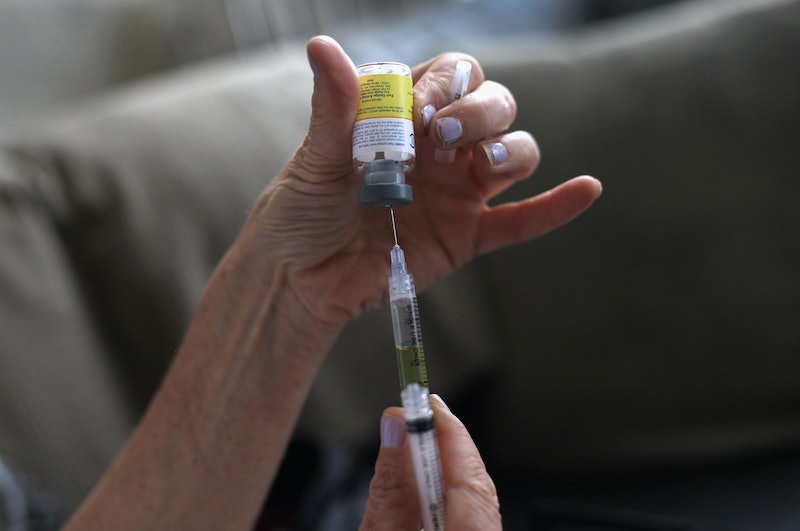 A few months after 29-year-old terminal brain cancer patient Brittany Maynard became the face of dying with dignity, a new case is reigniting the right-to-die debate in America. According to Reuters, 53-year-old leukemia patient Christine White is suing the state of California for blocking her right to physician-assisted suicide. California state law currently prohibits doctors from encouraging, advising, or helping terminally ill patients to commit suicide, and the provision hasn't been updated since it was passed nearly 140 years ago.

The lawsuit is being brought by the Disability Rights Legal Center on behalf of three California citizens with cancer and three California doctors who regularly treat terminally ill patients. White, one of the lead plaintiffs, has been battling cancer for the last seven years. Although she's currently in remission, White said in a statement that she's making plans for when the cancer returns. If it does, she would like the option to die with dignity. She said:

I don't want to die in a hospital, I've seen too many of my friends in the cancer patients' community die that way. I want to be in control of my life and die a peaceful death here in California, my home.

The plaintiffs are asking the state of California to clarify its vague assisted-suicide law. White, along with her attorneys and fellow plaintiffs, believe the current law doesn't apply to doctors helping their patients, who are in sound mind, commit suicide. In fact, the attorneys believe that aiding a mentally competent patient in ending their life is not suicide at all.

"I am asking the state of California to remove the legal barrier between my doctor and myself to help me achieve a peaceful and dignified death at the place and time of my choosing," White said on Thursday at a press conference in San Francisco.

Bay Area physician Dr. Robert Brody, who also serves as a professor at the University of California at San Francisco, said in a statement on Thursday that he joined the lawsuit as a plaintiff because of what he's experienced while treating patients nearing the end of their lives:

Some dying patients, even those getting the very best palliative care available, are forced to choose between enduring unrelenting suffering or taking matters into their own hands to end their lives prematurely by uncertain or violent means. The current murky legal system means that physicians are placed at risk, and must choose between potentially skirting the law to respect their patients’ choices, or abandoning them to bad information, uncertainty, or violence.

The lawsuit strikes an emotional note following Maynard's death in November. The 29-year-old UC Berkeley grad was originally a California resident, and she moved to Oregon in 2014 just so she could have the option of dying with dignity. Currently, Oregon, Washington, Montana, and Vermont are the only states that allow legal physician-assisted suicide. Meanwhile, 39 states have laws prohibiting the practice.