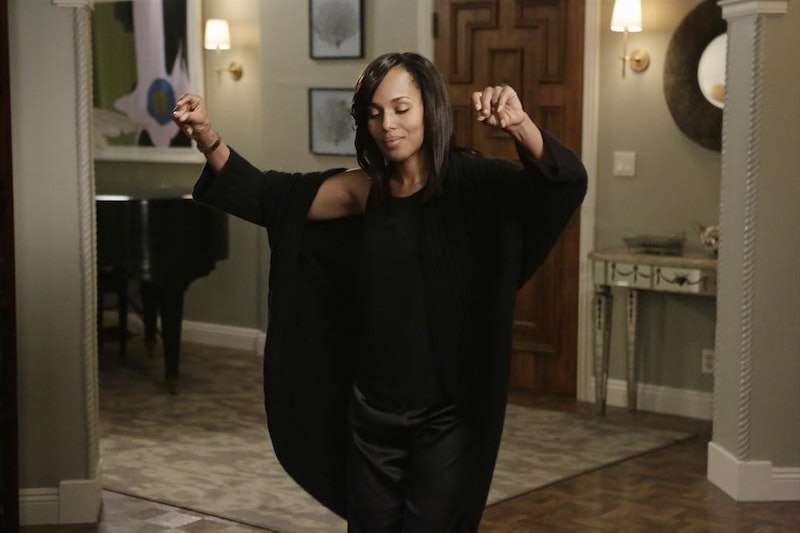 How much would someone pay to control the President of the United States? We'll all find out during Thursday night's Scandal episode "Full Circle," which will lead to a full-on bidding war as Olivia Pope gets put up for auction. If you recall, last week our savvy political fixer finally found a way to "handle" her abductor Ian by convincing him that he could stand to make a lot more money selling her to the highest bidder than just keeping her hostage for the Vice President. And given that this is Liv we're talking about, she, of course, came out with the best line of defense: "Do you wanna be a babysitter or do you wanna be a boss?"

Little does he know that she's really the one in charge, so while he's busy seeing nothing but dollar signs, Ms. Pope knows that Huck & Co. will be hard at work tracing her whereabouts. Of course, I doubt it'll be as easy as that. (This is a Shonda Rhimes show, after all.) However, it's certainly a step in the right direction regarding Olivia's inevitable escape. (Gladiators always win, people!) Nevertheless, that still leaves a very important question up in the air: who will be Olivia's highest bidder? Sure, I guess it could end up being a whole country since having the President in your pocket would be extremely appealing for any nation. But it's always a lot more fun when it turns out to be someone you actually know.

And it just so happens, I already have a few people in mind…

I mean… can you imagine? This guy was dangerous enough to begin with let alone if he were able to actually control the President's every move. He'd be pretty much unstoppable. Plus, then he'd have Olivia right where he wants her as well — in his complete control. Now, I'm not entirely sure how much money he has in his bank account, but I have to assume it's quite a bit, given his former job and unlimited resources. Rowan could totally win this thing (and after thinking about it, I kinda want him to).

OK, this is kinda cheating since it would more than likely be whoever Charlie is working for at the time. (I'm not a hit man expert, but I doubt they get paid enough to afford such a big expense.) It would be nice if this B-613 agent at least had a hand in the whole ordeal, though. That way, if the winning bidder was a brand new face, we'd already have some kind of character connection to him/her.

I'm sorry, but I still can't help believing that the First Lady will somehow have a hand in all of this, one way or another. And being the one to finally one-up both Fitz and Liv would make for a pretty intriguing character development. We've loved and appreciated Smelly Mellie, but now it'd be great to see her take on more of a high-stakes role in the series, and flat-out owning Olivia would be one epic way to do just that.