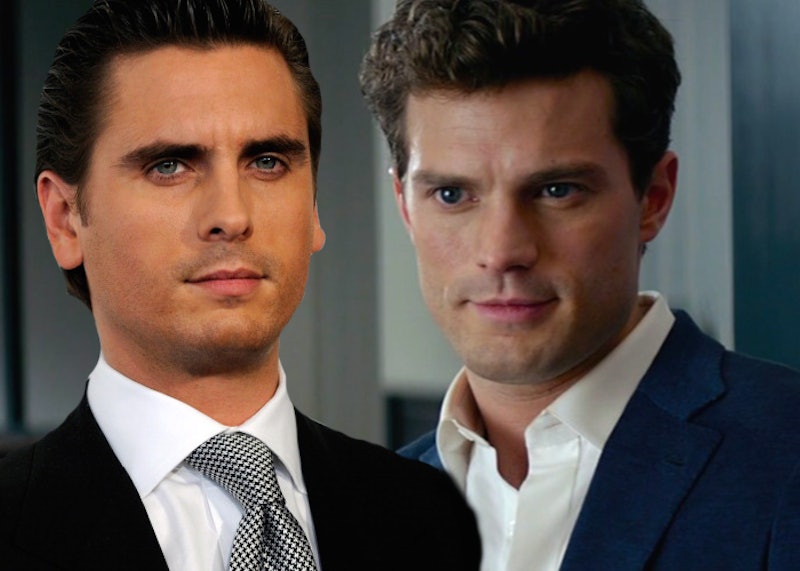 Ahead of the Valentine's Day release of Fifty Shades of Grey, there's, of course, been a lot of talk about one of the film's main characters, Christian Grey. When reading some early movie reviews, something struck me about him that I realized I should have picked up on before: Christian Grey has a lot in common with Scott Disick. While it might sound strange for me to say that I should've picked up on this random connection sooner, as a fan of Scott's antics and an avid viewer of Keeping Up With the Kardashians and its many spin-offs, Ireallyshould've picked up on this sooner.

Just as I feel pretty confident that Scott is the type of guy who idolizes Jordan Belfort in Wolf of Wall Street, I have no doubt that if Scott knows about Christian Grey, he thinks the 27-year-old billionaire is pretty cool. Sure, Christian has his problems — namely, being emotionally closed off — but he's young, rich, gets laid all the time, and has a killer wardrobe. There's no way Scott wouldn't like him!

Because I think these two actually do have a few things in common, I decided to enlist the help of a Venn diagram that explains everything from their shared love of helicopters to their business careers that no one really understands. Also, I figured that Scott can print this out whenever he's ready and hang on his bathroom wall. You're welcome, buddy.