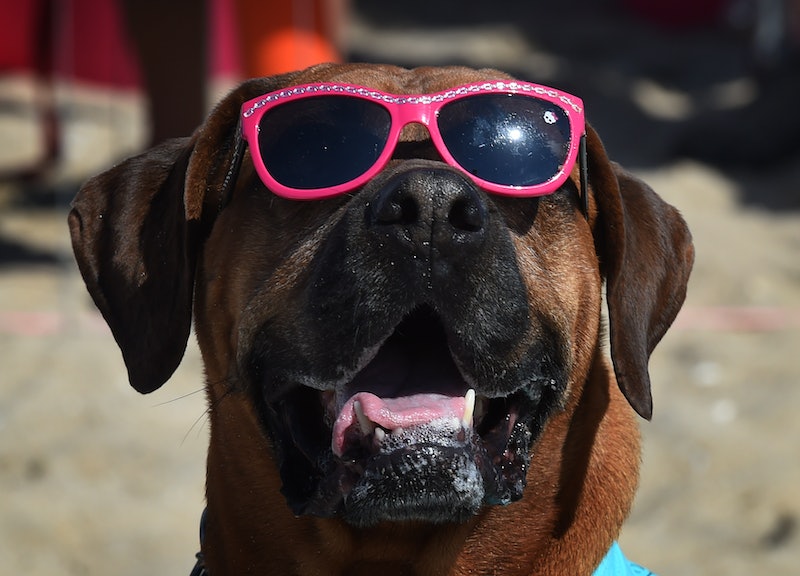 Does your dog really know how you're feeling, or are you just reading too much into their reactions in a desperate attempt to make your relationship with this warm, fuzzy, slobbery thing seem meaningful? Never fear! According to science, dogs know what human facial expressions mean. In other words, they really do notice how you're feeling! Hooray!

According to new research by Corsin Müeller at the University of Veterinary Medicine in Vienna, Austria, dogs can tell the difference between an angry human face and a happy human face. And though the researchers weren't testing for other emotions, it stands to reason they might be able to pick out others as well.

The researchers tested 11 dogs of various breeds by training them to press on a touch screen in response to either a happy or an angry face. The dogs were only shown half of each face at a time — either the top, bottom, or left side — to make sure they weren't just cluing into one specific feature, like a smile or the lack of one. Guess what? It turns out the dogs were, in fact, able to tell the difference between the types of facial expressions. Sure, it took most dogs longer to learn to recognize an angry face than it did a happy face; that's probably to be expected, though. I guess dogs are just more used to getting smiles. How can you not smile at dogs?

The researchers say they aren't sure if the dogs' ability to distinguish facial expressions is due to their individual experiences, or if domestication has made dogs naturally attuned to human expressions. Either way, though, it seems that dogs are pretty perceptive.

But as cool as the research is, it's worth noting that it doesn't definitively prove that dogs have any idea what these facial expressions mean. It might be a bit much to expect even the smartest dog to be able to truly understand the concept that humans have emotion; in fact, scientists are still investigating if even chimpanzees are able to understand that other individuals have minds and subjective mental experiences in the same way they themselves do. But it seems plausible that dogs would understand that certain facial expressions might be linked to different human behaviors, like petting or yelling.

Researchers say that their next step will be to test if dogs who have spent significant time around humans are better at reading human faces than dogs with less human familiarity. They are also planning to do similar studies on other animals, as well, including cats.

So will cats prove as smart as their canine rivals in detecting human facial expressions? Only time will tell.