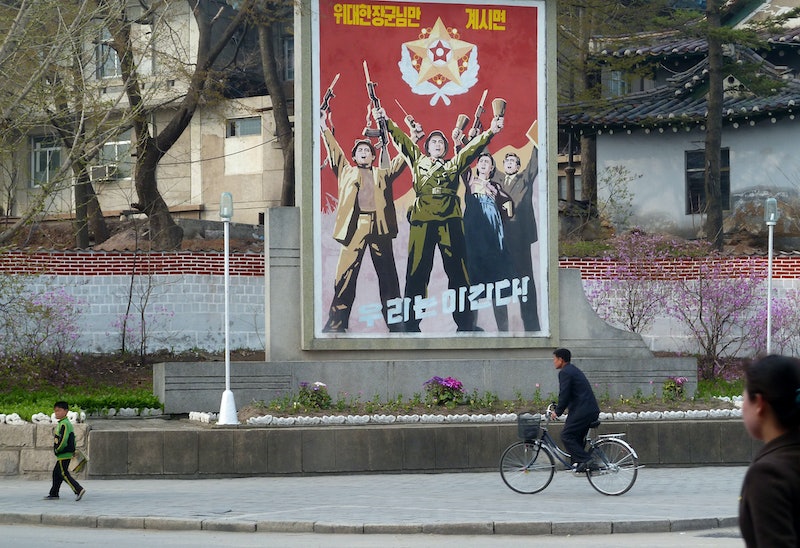 North Korea has been the butt of many jokes recently, most notably in the polarizing Sony film The Interview, which depicted the violent death of supreme leader Kim Jong-un, and also during a mocking Golden Globes skit by comedian Margaret Cho, a child of North and South Korean parents herself. Unfortunately, the jokes have begun to write themselves, it seems. On Thursday, North Korean news agency KCNA published a list of 310 political slogans that were composed by the Workers’ Party of Korea (the current ruling party) — many of them equal parts bizarre and aggressive.

"Let us turn ours into a country of mushrooms," instructed one particularly confusing slogan. "Let us raise the status of our country to that of a sports power at an earliest date possible! Play sports games in an offensive way, the way the anti-Japanese guerrillas did," stated another.

The exhausting list of political propaganda ranged from militaristic aggrandizing and agricultural advice to the just-plain-weird. "Let the strong wind of fish farming blow across the country," stated one. In contrast, a more aggressive stance against American and South Korean "warmongers" read, "Should the enemy dare to invade our country, annihilate them to the last man so that none of them will survive to sign the instrument of surrender!"

Such confusing rhetoric might baffle the rest of the world, but many North Korean defectors and refugees say that it's not unusual to the people of the nominally communist nation. In an interview with the Agence France-Press, 57-year-old defector Lee Min-Bok recalled his own memories of the forced propaganda, which he says were regularly distributed to the masses in the 1990s:

We were permanently buried by an avalanche of slogans. We had to memorise a lot of [these slogans] to show our loyalty, but they slowly lost any meaning for anyone, especially after the famine in the 90s. That greenhouse one has been around for decades. The problem is nobody had any plastic sheets of glass to build them, or fuel to heat them.

The slogan Lee was referring to, of course, was the allegedly re-packaged and reused phrase, "Grow vegetables extensively in greenhouses!" During the mass starvations of the '90s, human rights advocates accused the North Korean Government of crimes against humanity after USAID official Andrew Natsios reported forced famine in the northeastern provinces of North Hamgyong, where he said the government claimed "loyalty to the center ha[d] always been weakest." While an entire sector of the population slowly faded away into nothingness, the city centers bragged loudly of "Dear Leader" Kim Jong-il's successful reign and advised those suffering to simply grow more food. Posters plastered all over concrete buildings claimed that the people had "nothing to envy in the world," according to one young female defector named "Mi-ran", in an interview with The Telegraph.

The current slew of propaganda potentially hints at a harrowing pattern by the North Korean government and underlying unrest among the country's civilian population, many of whom live in deep poverty and under strict militaristic rule.

In a speech at the One Young World Summit in Dublin, Ireland, last October, 21-year-old Yeonmi Park poignantly recalled the systematic abuses inflicted on her and her family while under the government's practiced guise of total control:

I was abducted at birth, even before I knew the words freedom or human rights. ... North Koreans are being terrorised today. When I was growing up, I never saw anything about love stories between men and women...there is no Romeo and Juliet.

When I was nine years old, I saw my friend's mother publicly executed. Her crime? Watching a Hollywood movie. Expressing doubt about the greatness of the regime can get three generations of a family imprisoned or executed. When I was four years old, I was ordered by my mother not to even whisper [about it]. The birds and mice could hear me. I thought the North Korean dictator could read my mind.

The latest propaganda release may simply be a diversionary tactic to keep the public from the Asian country's real horrors and the silent suffering of the North Korean people. While the rest of the world might get a good laugh out of the clumsy wording and cartoonishly enthusiastic slogans, it is important to keep an eye on the undercurrent that is perhaps driving North Korea to yet another horrific end.