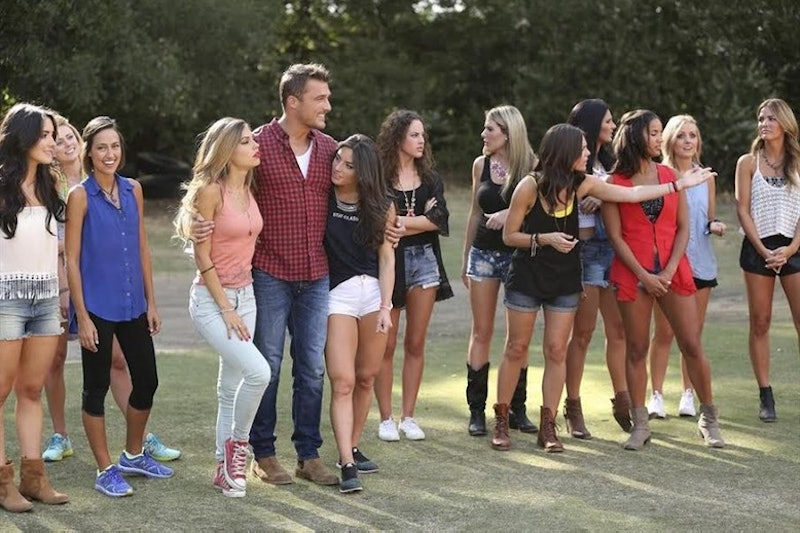 If you already thought this season of The Bachelor is going by super fast, get ready for Season 19 to be kicked into top gear. Next week, we get back to back episodes of the show — One on Sunday night, and one on Monday night (as usual). And as a bonus, on Sunday night, there will also be a Tell All special, similar to the traditional Women Tell All that happens every season, but this time, it's different. Chris Harrison is sitting down to ask all the hard questions just a little bit earlier than he normally does, and it's probably going to be amazing and incredibly dramatic. But what's the deal? Why is Chris (and The Bachelor in general) doing a tell all interview special this early in the game?

The best answer I can come up with: Because they can... and because nothing that happens this season makes sense. Since taking The Bachelor throne, either Chris or ABC execs looking to change things up a bit have made things way less predictable this season. Between upping the number of women on that first night to more than one eliminated contestant pleading for a second chance to the fact that Chris keeps springing these random one-on-one dates during what are supposed to be group dates, anything can happen this time around. I don't entirely get it, and I don't always like it, but it seems to be the way things are now.

Also, plenty has happened in Bachelor Nation to warrant a tell all special. Not only has Chris been a bit of a controversial bachelor lately, but the drama seems to be cranked up about 10 notches this season on what was already a pretty dramatic show. Add that to the fact that everyone's buzzing about the fact that last year's Bachelorette Andi Dorfman has unexpected broken off her seemingly happy engagement to Josh Murray, and you basically have the guaranteed success of a special episode.

And in case you're a little out of the loop on this whole special thing, allow me to make your day: Both Kelsey Poe and Andi Dorfman are sitting down with Chris Harrison for interviews, too. And from what Harrison has already disclosed, his chat with Andi is a pretty emotional one.

Still, I just want to hear from Kelsey. I have so many questions. My first one, which I've been wondering since the minute Kelsey started complaining about the group date at the lake: Why did you even come on this show?

So clearly, this early Tell All thing was absolutely necessary, Bachelor Nation.