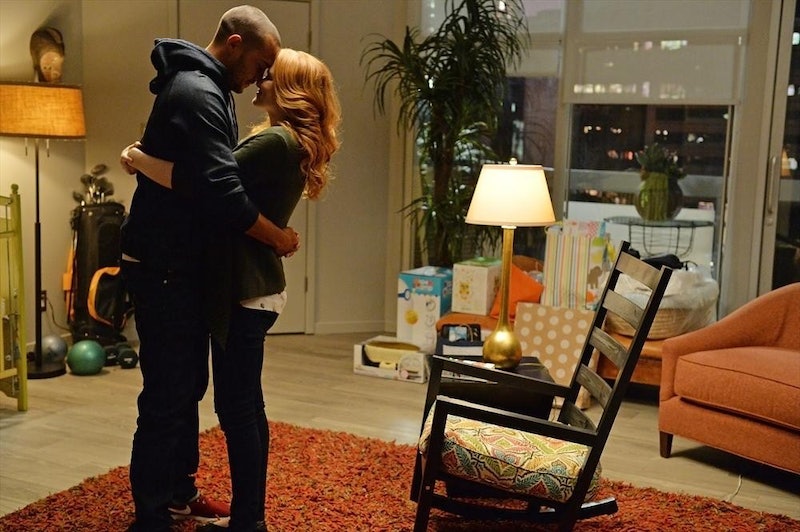 If Shonda Rhimes' game on Grey's Anatomy this week was trying to make us ridiculously depressed for the rest of our lives, she's officially succeeded. Don't mistake this sadness for surprise; thanks to the horrifyingly sad promos for the episode that aired Thursday ("All I Could Do Was Cry"), I expected to shed a tear or two, but I had no idea it'd be this heartbreaking. After way too much tearful debate (and unsolicited input from April's overbearing mother) last week, April and Jackson made the decision to induce labor. Their baby, Samuel Norbert Avery, was born... and promptly passed away after birth. Grey's has done some seriously damaging stuff to my emotions over the past 11 years, but aside from watching Lexie Grey die after the plane crash, this one may just take the cake.

This wasn't a decision April and Jackson came to lightly, obviously, and it was pretty strange to see Jackson this sad, which was definitely a first. Usually, he's pretty unruffled by anything that goes on, but this time, he was even in the hospital's chapel, trying to talk to a higher being he doesn't think exists. Fortunately, his mom was on hand to provide a little bit of extra support, and for once, Catherine Avery was more of a comforting presence than an intimidating one.

This is a tough hurdle for April and Jackson to overcome, but they will overcome it. They tackled this life altering, crazy scary situation together, and not even Geena Davis insensitively forcing death certificate forms on them could make them argue.

(And in the interest of full disclosure, I'm way relieved that Rhimes and her writers didn't take this in the direction I feared they would. I totally thought April was going to die delivering the baby. Maybe it's just years of Grey's making me extra jaded? In any event, I'm so glad it didn't go in that direction.)

And at the end, when Jackson and April lovingly cradle their new baby, and after that, when you see Jackson wheel April out of her hospital room? It's so heartbreaking, but it's good to see them care for each other like this. Something that could've easily torn their relationship apart is most likely going to make it stronger, and who knows? Maybe they'll try again for the family April so desperately wants in the future. And maybe next time, they'll get a happier ending.