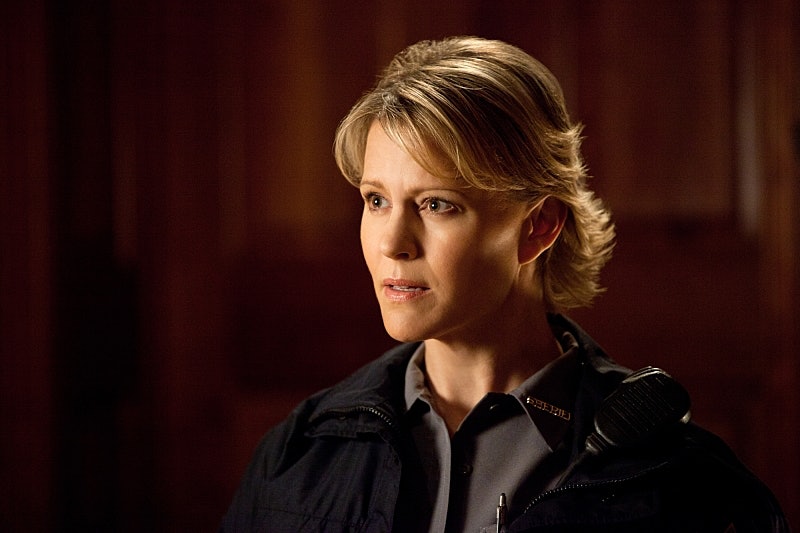 We knew it was bound to happen eventually, but that didn’t make the death of TVD ’s Sheriff Forbes any easier to bear. Though she was never on screen as much as our core Mystic Falls gang, Liz was always there when she was needed most — a constant guardian angel of both the town and its supernatural residents. She kept her daughter’s vampire identity a secret and never loved her any less because of it. In fact, their relationship became the strongest parent-child dynamic on the show. And now that she's actually gone for good, I find myself downright heartbroken. Seriously, why did I not buy more tissues today at the store?!?!

However, if she really did have to die, there was no better way Julie Plec could've gone about doing it. After an amazing day of cold case bonding with Damon — who she straight up admitted is her BFF (aww!) — Liz took a turn for the worst and had to be taken to the hospital again. And since Caroline had been busy preparing the family cabin (and locking lips with a certain Salvatore brother), she arrived at the point where her mother was no longer conscious. Luckily, vampires are capable of tapping into someone else's subconscious and sharing memories with the person they're linked to — much like what Damon did for Rose.

And the memory the writers chose to use was absolutely perfect. We flashed back to the day Liz taught Caroline how to ride a bike without training wheels when she was just a little girl. Of course, Young Caroline insisted she wasn't ready for her mom to let go yet (note the double meaning here), to which Liz confidently responded saying, "Yes, you are," as she watched her daughter pedal away without her. And just like that, Liz — whose final thoughts were of such a beautiful moment between her and her little girl — was gone. You guys, I'm weeping just thinking about it again.

Every child fears the day when they'll eventually have to say goodbye to their parents, and given that Liz's death was due to cancer and not something supernatural, it made the loss really resonate and feel all the more tragic. Liz said it herself — she is one of the only people in Mystic Falls to die an ordinary death. It's something that happens in real life all the time, which makes this, in my opinion, one of the truest and most heartbreaking deaths this show has ever delivered. (And yes, I'm including Aunt Jenna in that equation.) Plus, when Caroline weeps the whole world weeps with her.

So as much as I hate to see Sheriff Forbes go, I couldn't think of a better or more well-deserved way to bid her farewell. RIP, Liz. You will surely be missed.