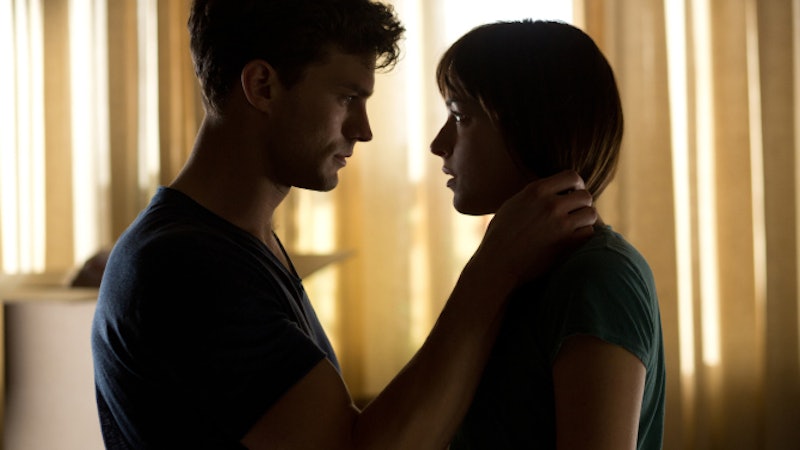 It's all happening, you guys. Finally, after ages and ages of waiting, Fifty Shades of Grey is out for the masses, and it does not disappoint audiences' inner goddesses, trust. If you're a virgin Fifty Shades of Grey movie-goer, than you might just be asking what you're getting yourself into. If you're a fan of the series, you are fully aware of what you're getting yourself into. Good news for fans: this is the first of more movies in the series to come. However, because this is the only movie out right now, let's focus our attention on how Fifty Shades of Grey ends. Specifically what page of the book does the movie end on?

The end of the movie was a "don't-forget-to-breathe" ending — SPOILERS AHEAD. Throughout the entire film, the question was where exactly in the final scene of the book was the movie going to end? Was it going to be in the playroom? Was it going to be in Taylor's car, as Ana wept in the backseat? It was a build up, for sure, but that's really what Fifty Shades of Grey is all about.

As a reminder, the book ended with Christian bringing Ana into the playroom, and whipping her until she started screaming at him about how many shades — you guessed it, 50 — of f***ed up he was. The two realize that they aren't right for each other — even though they both clearly love each other — and Ana leaves Christian's castle in the clouds. Taylor takes her home, and she cries all the way until Fifty Shades Darker.

So what page does the movie end on? Well, page numbers might differ copy to copy, but for a foolproof way of knowing where the movie ends, according to the book, it is the second to the last page. In the movie, the story stops right when Ana says, "Christian," as the elevator doors close on her (very reminiscent of the interview scene).

Audience members were fifty shades of shocked to see that's how it ended. There was screaming, crying, and I kid you not, the woman in front of me wailed, "If that's how it ends, I will die." But if you came for a "don't-forget-to-breathe," ending, well, Fifty Shades of Grey aims to please. And you'll be pleased.