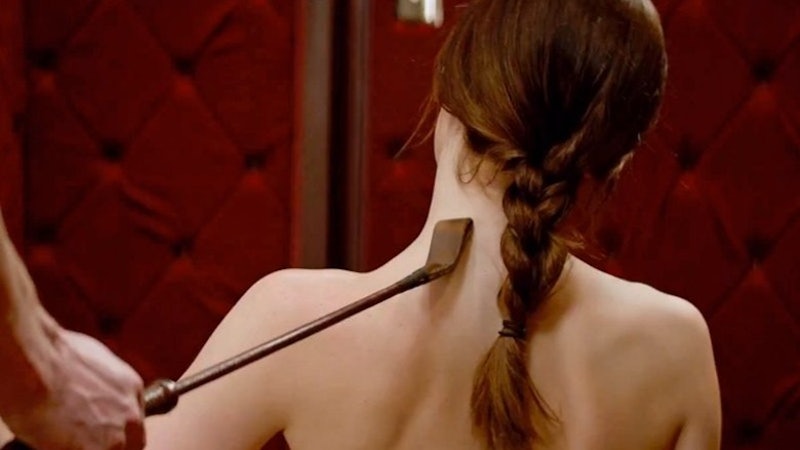 It's been a long road, but Fifty Shades of Grey the movie is finally in theaters, and what better way to spend your Valentine's Day weekend than watching two fictional characters fall in love? Truthfully, expectations were low going into the movie's screening, the book — while a page turner — isn't exactly the English literature that Ana studies at college. But the question many fans of the books might be asking before going into the movie theater with their big 'ole popcorn and erotic expectations is whether or not the Fifty Shades of Grey movie differs from the book. The short answer, yes.

Before the movie even started, there were parts of the book that were begging to be left on the cutting room floor. Ana's "Inner Goddess" was one of them. Certain sex scenes here and there were cut — don't worry, we'll get there — but the bread and butter of the film still remained. So how did Fifty Shades of Grey the movie differ from the book? Let me "enlighten" you on the big differences that really matter, all the way down to the small things that you might not have noticed.

You Want to Be Best Friends With Ana

Excuse me while I fan girl over Dakota Johnson for 20 minutes, but damn, she really nailed Anastasia Steele. The film doesn't feature the Ana we knew in the books, the Ana who was very self-depreciating, serious, humorless even. Johnson's version of Ana is in control of the relationship (more so than Christian), powerful, and absolutely hilarious. Seriously, people were bursting into laughter at lines she delivered, and not because they were poorly written. Johnson completely took control of the character and made her a strong feminist role that people will no doubt respect.

Christian is a Runner

It doesn't make that big of a difference, but Christian was into jogging in the film, something we didn't get much of — if at all — in the book.

It was quick, but before Ana left Christian's office, he snagged her interview questions and emailed the responses to Kate. This doesn't happen at all in the book, and it isn't a huge plot changer, but it was nice of him to put a little effort into the interview.

Jose, Kate, Taylor, Mia, Paul Clayton, these characters had a combined number of lines that surely doesn't exceed, I don't know, 50 (hehe). Kate is the most vocal out of all of them, and even she has maybe three scenes. Her worrying roomie vibe is gone, and out the window. The movie focuses on two people, and two people only.

From moving to Seattle, to graduating, even the small scenes between Ana and Christian, those moments barely got time in the film. Understandably, the film is working against the clock, and cannot include 500+ pages of content, but don't expect to see much time spent in Ana and Kate's Portland apartment.

Christian Uses an iPhone, and Ana Has Email

Christian was so pro-Blackberry in the book that you might be momentarily surprised to see that he is all Apple in this film. Another pleasant technological surprise? Ana does have an email address in this movie, it's just her computer is broken, that's why Christian gets her a new one. Because it's 2015, and if Ana didn't have an email address, I would have walked out of the theater.

Additionally, the email exchanges do exist in the film, but are more pop-up bubbles, and are most certainly not as extensive as the book. Also, no dumb subject changes.

Not Much Chatter During Sex Scenes

Where Were the Orgasms?

Ana's "explosion all around Christian" was not part of the film, along with Christian's big Os as well. Maybe these moments cheapened the film's "love-making" experience? While we're on the subject: Not once was the phrase "vanilla sex" used. Bummer.

The Expressions You Hated Were Cut

Can I get a praise emoji? You know how much you hated "Dios mio, Ana," or "my inner goddess shook her head," in the book? Well, the screenwriters must have felt the same way — sorry, E.L. James — because those annoying verbal quirks that the characters had were nonexistent in the movie. Unfortunately, some of our favorite verbal quirks — I'm looking at you, "Laters, baby" — also didn't get as much screen time as they do in the novel.

Christian Has a Hot Toast Moment

It wasn't in the book, but damn, should we be glad it's in the film. When Ana wakes up in Christian's hotel room after partying too hard, he hands her a piece of toast which he aggressively disrobes, then takes a sexy bite out of. The theater is sure to gasp.

Christian is Warmer and Ana is in Control

Christian is a much warmer character in the film. He has a personality, and doesn't say everything with his lips in a firm straight line. He's not Mr. Cuddles — yet — but he'll get there. Ana, on the other hand, is definitely the one in control of the relationship. Christian might be the one who is seasoned in sex, but Ana is really the one calling the shots. These character changes are definitely for the better of the film.

They Know Each Other For a Longer Amount of Time

One caveat with the entire Fifty Shades trilogy is that the first two books take place over the course of like, a month. The first book itself is only a matter of weeks... Totally difficult to believe, I don't care how tall, dark, and handsome Christian Grey is. The film seems to move time a bit slower. Although they don't specifically say it, I'd say the first film takes place over the the course of a month (hinted when Christian says they've been together for a few weeks at graduation).

The Movie Is in on the Joke

They laugh! I swear, they do! This movie knows that some of the moments are a little ridiculous. Example: When Christian spanks Ana for the first time, she is laughing. Do you think Ana in the book would even dare to do that?

Some Sex Scenes Were MIA

Say goodbye to your favorite sex scenes, because the film just couldn't handle them all. The bathtub scenes, the tampon scene, the silver balls scene, and the boat house scene are just a few that got the cut.

These two things got old in the book, very fast. I was basically screaming at Ana to eat, just so I wouldn't have to read about Christian getting mad that she didn't. Ditto to Christian giving Ana lavish gifts. In the film, neither character is really vocal about their trepidations towards the others actions. It's obvious Christian wants Ana to eat, but he doesn't make her tell him her food diary, and Ana doesn't make too big of a deal over the expensive gifts he gives her.

And I mean that in the nicest way possible. Fifty Shades of Grey the movie, a comedy, might be a plausible title. Fifty Shades of Grey the book, a comedy? No way in Hell. But you're bound — GAH, get it? — to laugh throughout this entire film. Whether it be during the hilarious negotiation scene (that takes place in his office, not the restaurant), or the super awkward graduation picture of Ana and Christian, you'll realize this movie doesn't have to be so serious.