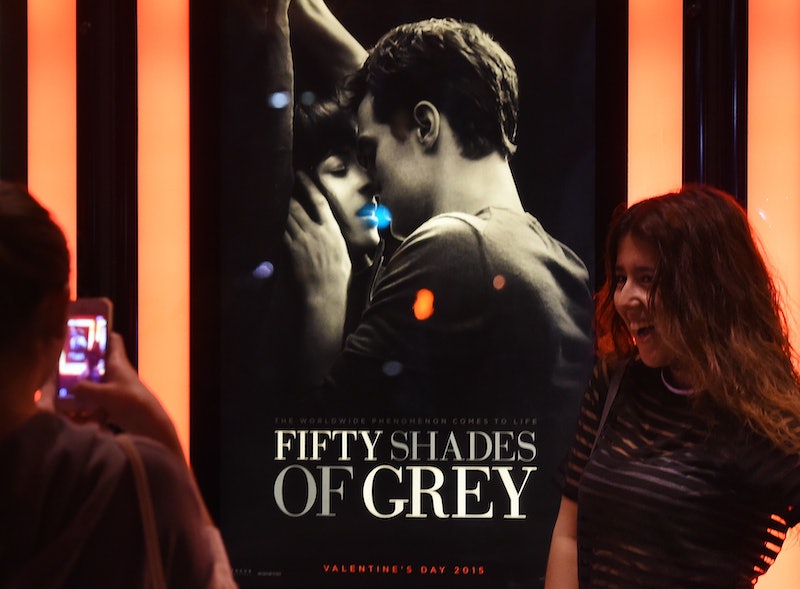 Before I ever saw the movie, I thought Fifty Shades of Grey was a story about a flaky doofus virgin who — with the help of a tortured millionaire playboy who's addicted to ben waa balls, whips, and maybe loving you too much — discovers her kinky side. But now that I've finally seen the movie, I know that Fifty Shades of Grey is actually a story about a charming, vivacious young college co-ed who, for reasons unknown, agrees to date a complete lunatic who obviously wants to murder her and wear her face as a hat.

But when I stepped into a movie theater on Thursday night, reporter's notebook in hand, enormous Diet Coke in other hand, I knew almost nothing about the lives or sex lives of Anastasia Steele and Christian Grey. I think back on that earlier, more innocent time, and smile; if only I'd known how good I had it. But does anyone ever really know how good they have it in the moment? Not until they see Jamie Dornan wear dad jeans while he whips a woman, and understand that their innocence is lost forever.

Pre-Show: To set the scene for you, I am one of about 60 people in a 500-capacity theater, at 11 p.m. on Thursday night. The audience seems evenly split between groups of women having a girl's night out, and couples. The groups of women are clustered towards the front of the theater, while the couples seem to have segregated themselves to the back of the theater, for shame or make-out-related purposes.

I had hoped people would dress up as characters, they way they do at a midnight showing of a new Hunger Games movie, but if anyone brought their own ben waa balls, they were keeping it to themselves. 0:05: Ana is here to interview Christian Grey, and she fell! She can't walk into a room properly! She's adorkable!0:06: Ana didn't bring a pen to her interview with Christian Grey! She doesn't know how to do even the most basic preparation for a job she agreed to take on! Adorkable!0:07: Ana doesn't know anything about agriculture! She's unaware of the greater world around her! Ah-dor-ka-BLE!

Also, this guy looks like he's 12 years old. Ana seems like she should be babysitting him.0:09: Wait, why is Christian offering Ana an internship? That doesn't make any sense, even as a come on. There has been zero sexual tension between them. He looks like a fifth grader struggling to deliver a social studies presentation, and she is acting like she thinks he is made of bed bugs and just wants to get away from him.0:11: Even while discussing their meeting with her roommate later, she seems like she is describing a guy with garbage bags for pants who sat too close to her on the bus. Her roommate, Kate, is for some reason interpreting this as sexual interest? Kate, you are the worst roommate.

0:16: Whoa, so this guy's hot move to make on a woman he barely knows is to show up at her job without asking, not even make it clear how he found out where she worked, and then joke about being a serial killer? Is this the beginning of an erotic drama, or the opening moments of an episode of Cold Case? 0:18: Christian: "You seem nervous." Ana: "I find you intimidating." Ha ha, both of those things are straight-up lies. I felt more intense feelings for the girls sitting near me who hooted during the Magic Mike XXL preview than either of these people do for each other. 0:22: Wait, why does Ana have a flip phone? Also, Dakota Johnson is wildly charming. 0:27: And now here's Christian again, chastising Ana about how risky it is to get drunk at a club with her friends. Significantly less risky than going off into the night with a stranger who STALKED YOU ALL THE WAY TO THE CLUB, RIGHT? 0:29: Wait, why are they making out? I am not trying to beat a dead horse/Dakota Johnson's bare buttocks here, but these two have significantly less sexual chemistry that Statler and Waldorf.

0:32: Ana, do not get in a helicopter with a strange man! I know your mother is a weird, selfish nightmare, and that is why you crave the approval of emotionally withholding millionaires with oversized baby heads, who say things like "No escaping now" to you as if they were charming little jokes instead of actual threats of grievous bodily harm, but surely even you can see that this is a risky venture.

0:33: CHRISTIAN GREY DO NOT LOOK AT ANA, LOOK OUT THE WINDSHIELD OF THE HELICOPTER YOU ARE PILOTING OH MY GOD

0:34: Ana has to sign a non-disclosure agreement before they have sex? Who is this goof, Tom Cruise?

0:38: Ana: "What do I get out of it?" Good question, Ana. VERY GOOD QUESTION. As far as I can tell, all she gets out of being Grey's submissive is the opportunity to watch Jamie Dornan make the exact same face in every single scene, no matter what is happening. Is that worth getting strung up in the Red Room of Pain for, Ana? Getting ol' Babyhead here to give you the same weird pained glances, as if he is holding in a very fiery fart?

0:39: Oh, after he bangs someone, Christian Grey doesn't sleep in a bed with them. I see. Probably because he can only fall asleep if he's alone, nude, secured safely inside a coffin, and shrieking at the top of his lungs, right? God, Ana, you were living in Portland! Couldn't you have just found some nice guy named "Goober" who played bass in a Phish cover band and pressed his own tempeh?

0:47: A couple ran out of the theater where I was watching this in the middle of the scene where Ana and Christian take a bath. A woman sitting next to me yelled "Get it!" at them, and it was the best part of the entire movie.

0:48: I still have no idea why Ana is going along with this.

0:49: Marcia Gay Harden! She joyfully camps it up during her brief moments on screen, because at least she understands that she's in Showgirls IV: The Voyage Home.

0:50: You know, if my friend disappeared for days with a dude that I did not know, and then when I got her on the phone she just mumbled "I can't talk about it now...I'll call you back," I would definitely be on the phone with the police in, like, seconds. But Kate is just like, "Cool, whatever, this is a normal way for someone to behave." Kate, you are a terrible friend and a discredit to womanity.

0:53: Christian is driving Ana home from his sensual terrordome, and then randomly pulls over by some woods. "Let's go for a walk [down this completely deserted forest road, where no one is around for miles and no one knows where you are and what are they going to do, trace the GPS on your flip phone?]"

1:00: Ana, he's in your house! He snuck into your house! He is literally Patrick Bateman! Ana, watch out! He made his millions in Murders & Executions!

1:02: And now, finally, some spankening! But how am I supposed to be turned on by the fact that he just blindfolded her with her sweaty sports bra? Has anyone involved in the making of this film ever touched a recently used sports bra?

1:10: But then Christian has to be all "I want to fuck you into the middle of next week." Ugh, Christian, why is all your pillow talk just comprised of slogans from t-shirts that they sell at Spencer Gifts?

1:11: Note from my boyfriend, who is such a saint that he agreed to attend this film with me: "You know, neither of these characters actually look particularly interested in S&M when they do it."

1:16: But at least Dakota Johnson is trying hard to pretend that she's into the sex scenes. Jamie Dornan just looks like he's waiting for them to call his name at Starbucks.

1:20: "Hi, I'm Kate. I'm supposedly your best friend, but I don't even want to spend 30 seconds hearing about where you've been all these days or if you've had a morally ambiguous sexual awakening because I have dinner plans! Tooldes!" This movie does not pass the Bechdel Test.

1:21: Christian can't deal with Ana visiting her mother without clearing it with him first? That's not S&M, that's being a dick. Girl, you could do way better.

1:30: My underwire just came out of my bra and is poking me painfully. Why hasn't my bra bought me a sports car or made me sign a non-disclosure agreement?

1:38: He stalked her to Georgia? Why is no one is the movie even remarking on how totally unacceptable and terrifying and unusual all this constant STALKING is?

1:43: How does Christian Grey make all his money, when he seems to spend all his time and energy stalking college students? Oh, you know, the old-fashioned way: pacing around a room and yelling "Unacceptable!" into a phone.

1:50: Wait, how will having him whip her super hard help Ana understand Christian's emotional depths?

1:54: Christian: "No, Ana, you can't love me." It's true! She can't love you because she barely knows you, and, in addition to that, she appeared to be barely tolerating you for the vast bulk of this movie. I don't get it.

1:57: Wow, I didn't think I could be disappointed by this movie ending — which was my own wildest sexual fantasy for the past hour or more — but that did it. Will Ana ever develop better decision-making skills? Will Christian ever learn to make more than one facial expression? Will they let Jamie Dornan grow a beard, so I don't feel like I'm watching the student council president pop a boner? We'll learn the answers to none of these questions, and more, in the two sequels already slated to begin production.

Also, just in case you were wondering, none of that turned me on the slightest. Though Dakota Johnson has shapely breasts which are fun to look at, and I tip my hat/bra to her.