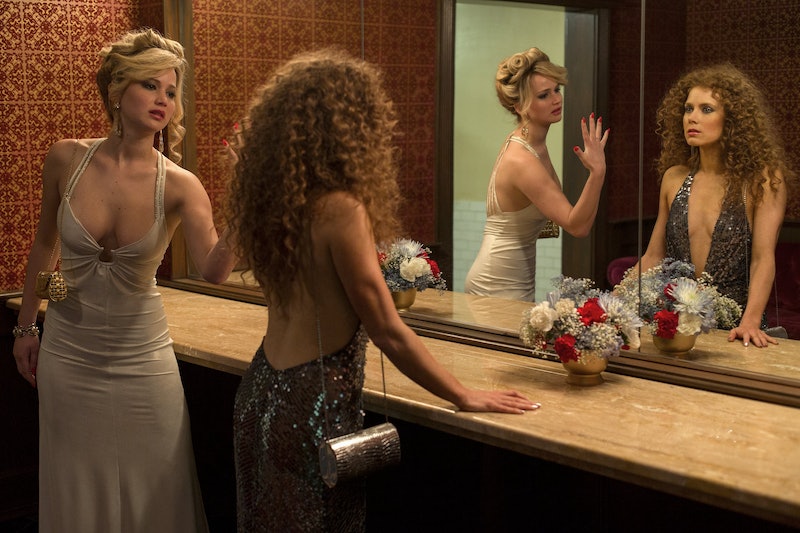 For years, we've operated under the assumption that passing a rudimentary test is all a film needs to do to be feminist-friendly. The famed Bechdel Test has sent some of our favorite films into shame spirals, where their glory droops into questionable territory. (Not Ratatouille too!) This year, half of the Oscar-nominated films can't manage to pass the test, but a close examination of the reasons why reveal that the test itself doesn't really tell us much about a film or its ability to create praise-worthy female characters.

The formula that creates a passing grade on the Bechdel scale is the first issue: The film must have two named female characters who speak to each other about something other than a man. By this classification system, 10 Things I Hate About You passes the test with little more than a brief conversation between two vapid teenagers: "There's a difference between like and love. Because I like my Skechers, but I love my Prada backpack," says Bianca. "But I love my Skechers," posits her pal Chastity. "That's because you don't have a Prada backpack," offers Bianca. Sure, the line is a hilarious, but this is supposedly all it takes for a film to be considered feminist-friendly — two ladies we know talking about their fetish-like love for a high-end accessory for a matter of seconds. The plot thickens when we consider also that stereotype-laden films like Sex and the City 2 pass the Bechdel Test with flying, glowing colors. Something is not right here.

By the test's definition, one of the greatest feminist triumphs in film in the last 10 years — Kathryn Bigelow winning the Best Director Oscar for The Hurt Locker — finds itself on the wrong side of the feminist fence. The film about a three-man bomb disposal team in Iraq was directed and produced by Bigelow and led her to become the first woman ever to win the directing Oscar, but by Bechdel standards, it's not enough.

And that's because, I'm just going to come out and say it: the test doesn't work. Even Alison Bechdel, the woman whose comic strip originated the concept of the test, doesn't find the test to be all that helpful. And as Robbie Cullen, the film critic for England's Telegraph recently pointed out, "For Bechdel it was never a test, but the trigger for a pessimistic punchline: even in films that meet these seemingly foolproof criteria, the female characters are always delimited by something." The blatantly simplistic test is imperfect, yet, somehow this it has driven the feminist/not-feminist classifications of films for years despite the fact that in many ways, it doesn't even begin to scratch the surface of what makes a film a feminist triumph.

Take for example, The Hunger Games and The Hunger Games: Catching Fire. Both films pass this test rather easily by the sheer fact that Katniss forms alliances with other women and their discussions are all about survival, but that nugget of the films' content is not what makes the film series feminist-friendly. It's the depth of Katniss' character, the fact that she's not a simplistic "strong female character" who batters down doors and demands our lemming-esque applause. Katniss is complex, she's unpredictable, she's a full human being that doesn't fit into any of the boxes Hollywood has carved out for her and that's why The Hunger Games lands on our good side — not because our heroine chats with Rue about not dying.

Still, the problem isn't simply the frustrating truth that the smallest of interactions between named female characters — keep in mind that the 2013 father-son ballad Nebraska passes thanks to June Squibb having one conversation with a relative for a few seconds — counts as a success, or that Sandra Bullock's character in Gravity gets the shaft by virtue of being only one of two visible characters in the entire movie. The problem is that the test dictates a superficial triumph of two characters who don't entirely dictate any meaningful progress in the entirely male-dominated film world.

The test has no consideration for women like Thelma Schoonmaker, the three-time Oscar-winning film editor who's responsible for the clean flow of every Martin Scorsese movie since Raging Bull. It has no measurement for the fact that Oscar-winners Fran Walsh and Philippa Boyens co-wrote and produced all three Lord of the Rings films and the subsequent Hobbit movies. The test has no consideration for the one major factor that can actually help forge the right changes in the industry: female voices behind the camera as well as in front of it.

As a 2013 study through the New York Film Academy pointed out, the number of female characters on screen increases by 10.6 percent when a woman is directing and 8.7 percent when a woman writes a film's screenplay. While the Bechdel test blatantly ignores the importance of the still insulting small number of women working in film, it's clear that those behind-the-scenes roles have a great impact on the content of the films as well. But even that's not enough on its own.

The problem is that something as simplistic as our current measure of feminist success isn't going to be the proper measure for any film or project because the notion of a film's commitment to gender equality and praise-worthy representations of women is a subtle, complicated animal, not a multiple choice questionnaire. It's this blind, simple view that leaves Lupita Nyong'o's fantastic 12 Years a Slave performance or Scarlett Johansson's speech about independence at the conclusion of Her in the dark. It's one that says Bigelow is a feminist only in a record-breaking sense, but not in the cinematic sense. It's a view that sells women in film just as short as the rest of the industry has continued to do for years. And it's why the Bechdel Test has got to go.

More like this
Amanda Gorman Shared A Powerful Message On Meghan Markle’s Penultimate Podcast
By Darshita Goyal
This James Bond Event At Abbey Road Studios Was A 007 Fan's Dream
By Samantha Rollins
These ‘Love Actually’ Plotlines Are “Out Of Date,” According To Director Richard Curtis
By Grace Wehniainen
This Iconic ‘Love Actually’ Scene Drove Alan Rickman “Insane”
By Grace Wehniainen
Get Even More From Bustle — Sign Up For The Newsletter