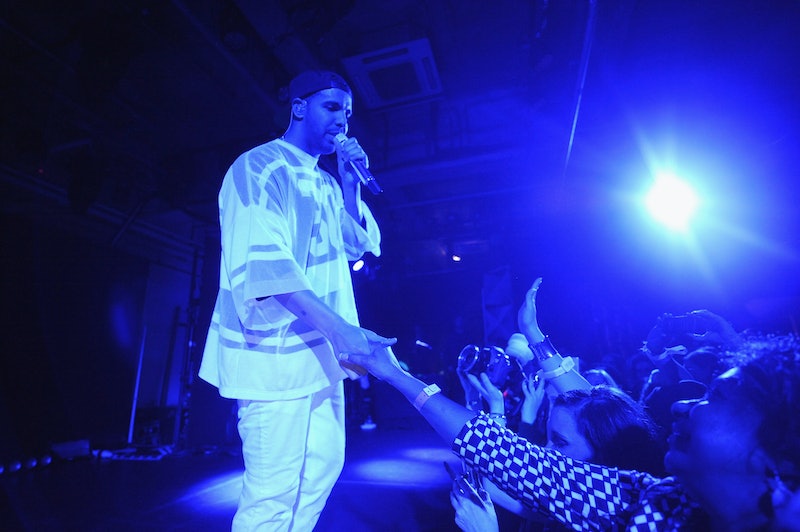 In an age when celebrities seem to share their every thought on social media, and those thoughts are then fair game for news articles and media speculation, it's amazing that they can still pull off surprise albums. Maybe it's part of the reason artists like Beyoncé, and now Drake, have chosen to drop their albums with no warning; they have to remain a little mysterious, a little unexpected in a post-empire world.

Drake dropped his mixtape, If You're Reading This It's Too Late, as an album on Friday morning, minimally tweeting a URL to its iTunes link. While it was originally available for streaming on Soundcloud, it's been taken off now — so it looks like you're going to have to shell out the $12.99 or sign up for a Spotify account.

But it's worth it. It's a generous offering from Drizzy, large in both length and sound, though it's not exactly new territory for the Canadian artist. Many of the songs are fairly simple, with Drake expressing his artistic domination (along with signature vulnerability) over some phenomenal trap beats.

What's a little confusing is what this means for his planned new album, which was supposed to be entitled Views From The 6. "The 6" refers to his hometown of Toronto, and many of the song titles on If You're Reading This... make the same reference. However, this does sound more like a mixtape than an album, in part because of its simplicity. For now, little is known about the surprise release, except that Drake has a lot of people to thank for his new album, including Madonna and himself.

I can already hear If You're Reading This It's Too Late blasting from cars, and a few tracks seem to have potential to become radio hits. Here are all 17 tracks, from least to most surprising.

A little generic in its title and execution, though the fade out of the chorus is kind of pretty.

This is all classic bravado, and it's not all that surprising, mainly because it was released in October.

This one maybe gets a little repetitive, from its beat to its lyrical style to its similarity to the other two opening tracks on the album.

This might have the most swag on the album. And I like that they don't play the Wayne card too soon — though I'm not sure if it was his best possible use.

The sinister piano in this is perfect, and the connection between "enemy" and "energy" is pretty clever.

This is a reference to the star who was recently forced to surprise release her album, rather than the Virgin Mary. The flow is classic Drake.

Drake opens by proclaiming that he has read receipts, but doesn't text back, and that's a good indicator of this song's bravado. I like how many changes this song goes through, though I found the answering machine noises a little cheesy.

This is a kind of cute plea for a nice lady before taking an unexpected sinister turn. However, it could also really do without the canine sound effects.

This is short and sweet and beautiful, and a little Frank Ocean-y.

The beat on this one is phenomenal and sounds a little old fashioned. It's got the same sinister tone that haunts this album. He asserts that he's not the same Drake as he was four years ago, which is apparent.

The flow, along with the excellent beat swerving in and out of distortion, makes this an instant hit.

Drake pulls a Kanye in this lovely shoutout to his mother. The sentiment of this track feels the most emotionally true on the album.

This one comes on strong and jubilant with a lovely review of his career and a look toward the future. It's the perfect end to the mixtape, and it's a real Tyga diss.

This simplistic R&B assertion of eloquence and heroism is an instant classic. Lyrically though, this is pretty familiar territory.

Released a few hours before the album dropped as a short film, this is a totally lovely song with a perfect, simple beat and the faintest croon in the background. Seriously with the animal effects, though?

As this track begins, I found myself waiting for a drop, which happens very rarely on this album. And it came in a wholly unexpected way before fading off as a dance beat. It's absolutely the best song on the whole album.