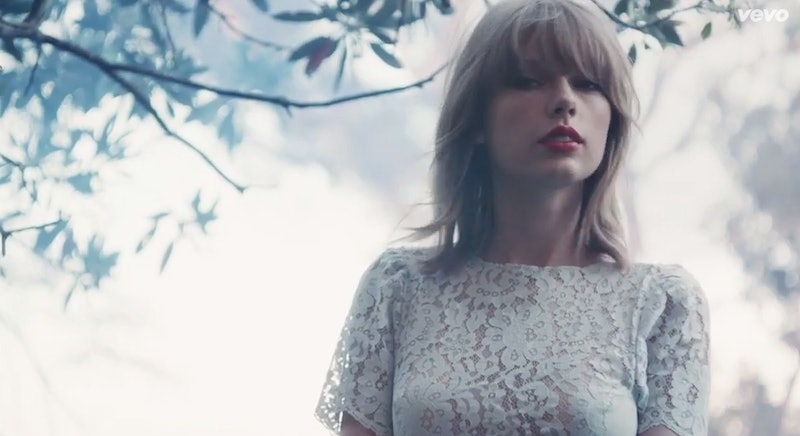 As promised, Taylor Swift released the video for her song "Style" today, and, in keeping with the theme she set for herself with the video for "Blank Space," it's... pretty crazy. To the point that we might have to start calling her Cray-Cray Tay-Tay. It has a nice ring to it. But even though she's got the insane vibe going for her in both videos, it's a different kind of insanity for each. Which is why I, pop culture detective that I am, decided to watch each music video approximately ten thousand times to determine which one takes the cake. A cake that is then stabbed.

And the verdict? Weirdly enough, I've determined that the Swift who appears in "Style" is actually the nuttier of the two. Because while that version of her screams and cuts up your clothes and cries until she has trails of mascara running down her face and stabs your aforementioned cake until it bleeds cake blood, the version we see in "Style" is way scarier because it's all under the surface. She's like a silent predator hunting this dude, and since the song is clearly about Harry Styles, we'd recommend he sleep with one eye open from now on.

Need proof that that "Style" is the cray-cray-ier (it's a word) of the two? Well that works out perfectly, because we have it.

She's Behind You Right Now

In "Blank Space," we see Swift raging at that hot model guy quite a bit, but in "Style," they hardly even appear in the same frame together. Instead we always see them separately, and shots like this one make it seem like she might be stalking him just the teensiest tiniest bit. THE CALL IS COMING FROM INSIDE THE CAVE.

She Still Has Your Necklace

It's a well-known fact that Styles and Swift got matching paper plane necklaces during their relationship and that voodoo is real and you can do it on necklaces, not just dolls. Full disclosure, one of those facts is not actually well-known or confirmed, but still v. interesting.

Or from The Ring. Or a child of the corn. Either way she's at the end of your hall right now and she doesn't mind waiting until you get home.

She's Skilled In The Art Of Camouflage

But honestly how is she doing that, she could hide literally anywhere. (Although ideally in a sparse forest at dusk or dawn.)

She Rigged Up Your Curtains To Play Movies Of Her

Not traditionally a normal-girl move.

She Never Gave Your Camera Back

She grabbed it right off your face and threw it in the ocean and the worst part? She never once stopped smiling.

Is it just me or is it getting super Gone Girl in here?

She Is A Smoke Monster

Probably should've led with this one.

She Lives In Your Mirrors

But also breaks them because she is just so reckless.

She Makes You Eat Mirror Pizza

And the only toppings she'll let you have are 'my own red lips'. So rude.

She Doesn't Know Where She's From

She says she's from this state, but that is literally not a state, crazy — it's another shard of the mirror you broke.

She Rides In The Back Seat While You're Driving

She says it makes her feel "fancy."

She Is Commander Of Storms

For future reference, if you're dating a girl who can make lightning with her fingertips, that's a red flag.

She Made You Turn Your Back On The Ocean

Only the most dangerous thing you can do in nature.

She's Not Quite Corporeal

If your girlfriend blurs at the edges when she's singing, she might be a poltergeist.

She Wore This Dress

Honestly just can't get behind those sleeves.

She Refuses To Wear Shoes But Never Gets Cold

She told you "my feet are immortal" and then put your entire head inside her mouth as a prank. You laughed, but only because you were scared.