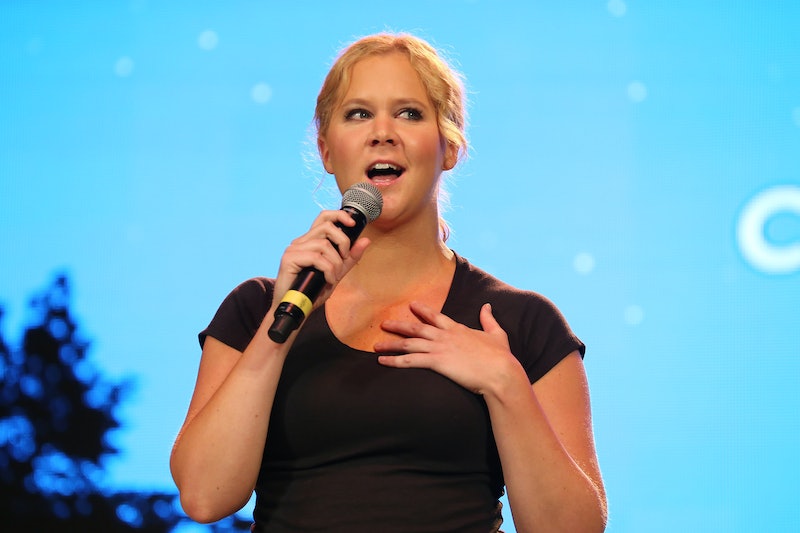 You know that famous theory that women aren't funny? Here's why that's absolutely incorrect: Even in the midst of ridiculous criticism, most of our favorite funny women are still hilarious in their responses. And no one displays that better than Amy Schumer. The comedian/actress, who is known for her outrageously funny series Inside Amy Schumer on Comedy Central, was criticized by writer Jeff Wells from the online publication Hollywood Elsewhere on Thursday for being at the center of romantic interest from several men in the new trailer for Schumer's film Trainwreck directed by Judd Apatow. Because according to him, Schumer is just "not good-looking enough" to have men wanting to sleep with her. UGH. Thankfully, though, in perfect Amy Schumer form, the comedian shut him down on Twitter whilst simultaneously remaining hilarious and true-to-form.

Wells started his post about Trainwreck's trailer with an immensely insulting headline – "Apatow’s Funny-Chubby Community Has New Member," — and it just got worse from there. Wells stated that there was no way Schumer could be "an object of heated romantic interest" and escalated his offensive remarks by comparing Schumer's features to those of "a blonde Lou Costello around the time of Buck Privates, or Jennifer Aniston‘s somewhat heavier, not-as-lucky sister who watches a lot of TV."

Schumer's response? It was all about her trademark style of wit:

Wow. If it were me he was insulting, I might have immediately launched into a rage, blackout-inducing tirade. But see? This is why Schumer is a much better person than myself and why her intelligence and humor deserves to have a more mainstream stage. The comedian's style of humor does include self-deprecation, which you can see clearly even in the trailer for Trainwreck.

In fact, some of her funniest sketches from Inside Amy Schumer pokes fun at the idea of women's looks — from women comedians only being scrutinized and analyzed based on looks and not actual talent in displaying humor, to women insulting themselves because they are unable to take compliments.

So for her to go ahead and post a semi-nude photo of herself is both a brilliant display of acknowledging the insults, and also showing pride in her body and herself. She's a beautiful woman and she's funny. In his post, Wells tries not to take responsibility for his asinine and offensive comments by stating "Don’t look at me — I’m not the one who made her the star of a film about a plucky, free-spirited girl that a lot of guys want to bang." And then he suggests that maybe Jenny Slate would have been a better leading actress in the film thanks to being "nicely attractive."

But what Wells doesn't realize is that Slate would never be flattered by these remarks. And more importantly, Trainwreck was written by Amy Schumer and always meant to star the comedian. It's a shame that when it comes down to talking about female comedians, the conversation always goes to looks rather than quality of comedy. Because if Schumer's work tells us anything, we need to be looking forward to Trainwreck, not criticizing it for objective and frankly stupid reasons.