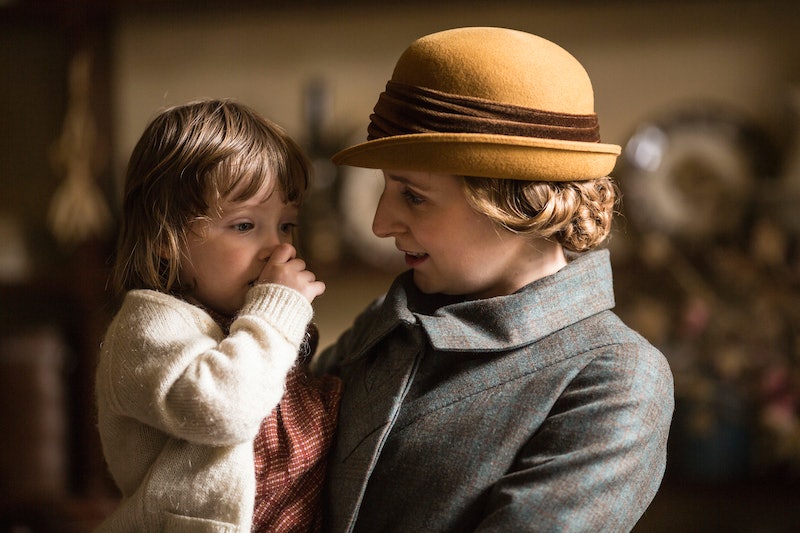 Oh, the hot mess that is Lady Edith on Downton Abbey. Yes, I'm happy she has reunited with her daughter Marigold and can stop harassing the Drewe family, but could Edith really take her daughter back like she did in Episode 6 of Season 5? What exactly were British adoption laws like in the 1920s?

This is now the second time that she put her child up for adoption, just to take her back again. Although I have sympathy for Edith, I'm no fool. I know that depressed Edith is just the worst. But I also want to punch out Mary for being such a jerk to her younger sister all of the time. Only Tom and Cora remotely give two shits about Edith and if Cora wasn't the most ridiculous person in the world maybe she would have figured there was something seriously going on in Edith's personal life.

So now that Edith has gone all super dramatic by snatching her baby away and leaving Downton with no word on where she is staying, will there be any legal recourse for her actions? According to the book A Child for Keeps: the History of Adoption in England, 1918-45 by Jenny Keating, there were no laws about child adoption in England until 1926. Based on a timeline from The New York Times , Season 5 of Downton Abbey is primarily taking place in 1924, which means there were no formal laws outlining what Edith could and could not do as Marigold's birth mother.

Dr. Daniel Grey in reviewing the book A Child for Keeps wrote the following about adoption in the U.K. before 1926:

Until then, child adoption was an informal and generally secretive procedure which gave the adoptive parents no rights whatsoever: a biological parent could (and in some cases, did) appear at any time and demand custody of a child they had neither seen nor contributed to the care of for years at a time.

Errr, well there you have it, Edith. Seems like legally she will get off scot-free, which is fascinating considering that it was illegal for Thomas to be gay at the time. (You gotta love the legal system.) But that doesn't mean she has handled the situation well. I wish that Mr. Drewe and Edith had just been honest with his wife, Margie, about the fact that Edith was her mother. Of course, that could have led to her reputation being ruined, but that's going to happen in some respects anyway. The struggling family took in a child under the assumption that her parents were dead, and Margie loved Marigold as her own. Margie was a little too rough on Edith at times, but I could understand why you wouldn't want the rich woman from Downton using your adopted child as a plaything.

Now, Margie knows the truth and Edith has fled with Marigold after learning for certain that Marigold's father, Michael Gregson, is dead. Tom didn't do a great job at trying to stop Edith from leaving Downton or get information from her — but don't worry, the Dowager Countess and Aunt Rosamund are on it. In the Episode 7 preview, Cora says to the two women that Edith must be found — and because it's Downton, we know she will be.

As for the scandal that will come out if Edith's truth is exposed, if Dowager Countess Violet can handle the knowledge that Edith had a baby out of wedlock, than the rest of the family should be able to deal with it too. And if (and by "if," I mean "when") Edith does return to Downton, she definitely owes a lot more than an apology to the Drewe family for snatching little Marigold away from them after they took her in.