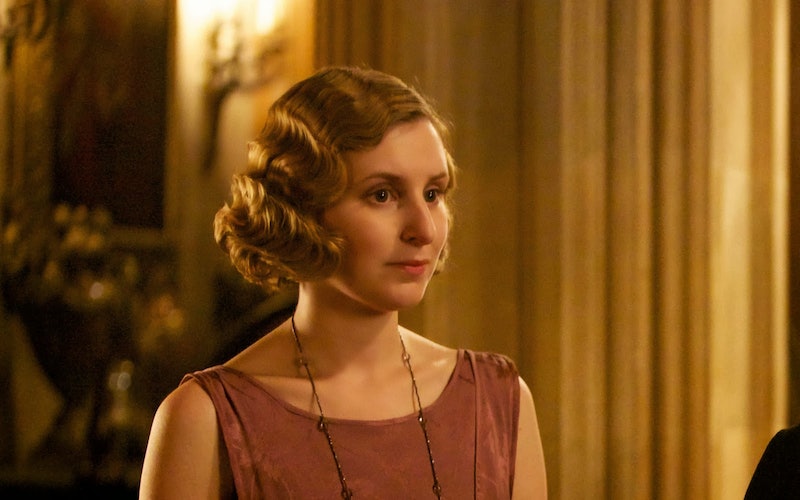 Oh Rose, you rabble-rouser, you! Sunday's episode of Downton Abbey centered around a cheeky (and somewhat disingenuous) surprise birthday party for Robert planned by none other than Downton’s #1 Party Girl Rose. Though, of course, the soiree was merely a ploy to invite Jack Ross and his band and to bring the jazz age (and a black man, oh heavens!) into Downton. Everything was kept hush-hush through the secret vault that is Mrs. Hughes. Bless her.

Amidst the excitement around Lord Grantham’s b-day, Violet and Mrs. Crawley continued to hilariously butt heads of the poor gardener Peg. The letter opener is still missing and neither women will rest. That is until Mrs. Crawley feigns illness at Violet’s residence and uses her moment to "lie down” in order to do some upper-class snoopin’. Naturally, the letter opener is in the sofa cushion, Peg is given his job back and both ladies get SERVED in a way that old white ladies of the English high society can.

Mrs. Crawley and Rose weren’t the only schemers in Downton this week. Thomas was up to no good (as per usual), forcing Baxter to dish on the secrets of the upstairs. To his grave disappointment, all of the hubbub was over a party. Lord knows what he’d do with some REAL news... like the news that EDITH IS PREGNANT AND MICHAEL HAS GONE MISSING. How can she ever face Papa? Will she be disgraced? WILL SHE FIND FASHIONABLE MATERNITY WEAR?

The downstairs staff also face their own ruffled feathers as Alfred receives word that he’s been accepted into the Ritz course after a first choice candidate dropped out. (HAHA, JIMMY, SHOWED YOU!) It causes a lot of feels: Daisy’s heart breaks and Alfred professes his respect and love for Mr. Carson to the Granthams in a moment of emotionally honest un-English-ness. Ivy later bemoans how she wishes she had gone for Alfred after Jimmy tries to get fresh after a date. Mrs. Patmore then serves the best one-liner of the night. Ivy goes on about how Edward was so nice and then turned sour, Mrs. Patmore slides in, “How many women have said that since the norman conquest? BAZINGA! Then Ivy gets served by Daisy for her selfish treatment of Alfred and then gets served AGAIN by Mrs. Hughes.

While the rest of the downstairs staff are fussing over Mr. Moleseley returning and keeping the party a secret, Anna and Bates try to treat themselves to a romantic night out. After a rude encounter witha concierge at a #fancypeople restaurant, they are saved by a smiley Lady Cora. (Who looks like Homer Simpson after he eats the world’s spiciest pepper). And though they have a lovely meal, the shadow of what’s happened to Anna continues to cling to them. Bates also uncomfortably notes that when he thinks of what happens, “I want to murder.” Sure Batesy, real casual. Lady Cora overhears… and later dishes to Mary... who are both overheard by Baxter... and SCANDAL.

Thankfully, the whole episode wasn't strictly gossip — We get a tender moment between Tom, Mary, and Mrs. Crawley in the nursery discussing their engagements and how sickly in love they were with their dearly departed. Though rather than being particularly grim, they all agree that they were in fact the lucky ones. And in that moment we see all three of them with the resolve to continue forging lives for themselves.

Right, the party. Napier and his sassy (cough, probably future suitor of Mary) friend Charles Blake join the family for Lord Grantham’s soiree despite the fact they are not actually there to help with the land, but assess how much their ways of life affect the local economy. After the #fancypeople dinner, Rose announces the surprise and everyone finds their way into parlor — naturally everyone is shocked to see a black man singing in Downton. But Carson already got the most uncomfortable confrontation out of the way when he asked Jack if he ever thought about going to Africa. He then tried to cover that up by talking about the end of slavery, which only made things more painfully awkward. But hey, at least Lord Grantham seemed to be on the right side of history on that issue. BUT WAIT, THERE’S MORE. Later in the evening Mary finds Rose and Jack (ugh, with those names) snogging in the kitchen.

Lest we forget guys, Edith is pregnant and Michael has gone missing. And to think Violet thought a missing letter opener was her biggest problem.

More like this
24 Years Ago, 'Friends' Dropped Its Most Underrated Ross & Rachel Episode
By Grace Wehniainen
Netflix Reveals First Look At Wednesday In The 'Addams Family' Spinoff Series
By Bustle Editors
How Much Are The 'Schitt’s Creek' Stars Worth?
By Hugh McIntyre
Twitter Is Praising George & Charlotte's Attendance Of The Queen's Funeral
By El Hunt
Get Even More From Bustle — Sign Up For The Newsletter