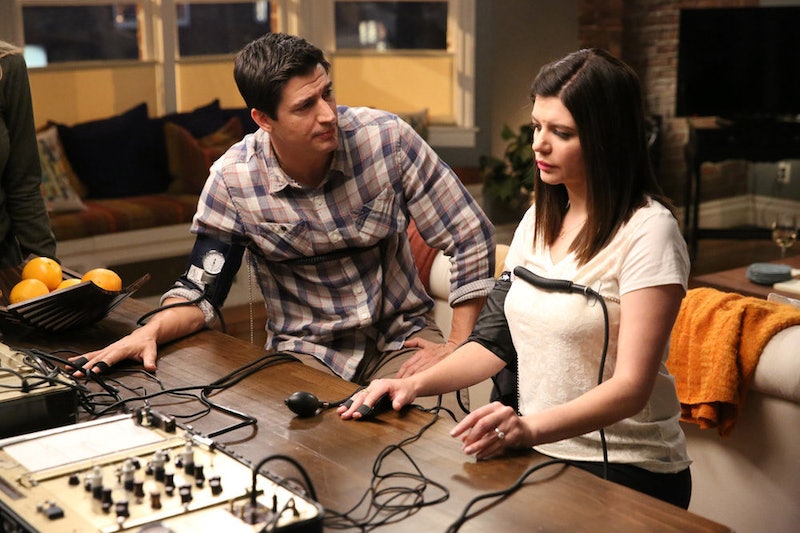 There were a lot of new shows this TV season that flopped and moved on to a better place (Hulu, if they're lucky). Marry Me is one TV show that is still hanging on, barely, on NBC. The show revolves around a couple — Jake and Annie — who have dated for six years and are finally engaged, planning their wedding. The show doesn't just revolve around their wedding, it includes the trials of relationships — who would watch a Game of Thrones-like episode without their significant other?! — and friendships through supporting characters like Gil, Dennah, and Kay. So will this real, comedic look at life and love make it to next year? A Marry Me cancelation seems more likely than renewal, so I'm not sure if it is even going to make it down the aisle.

NBC had a rough fall 2014 season. Shows like A to Z, Bad Judge, and Constantine were all canceled midseason. For Marry Me, things started out on a high note. In Nov. 2014, Marry Me was granted five more episodes, rounding out its first season to 18 episodes. That's really good news for us who love this show, because obviously the network saw something in it that they liked. Unfortunately, I'm not 100 percent positive the rest of TV viewers are seeing what they like, as Cancellation Bear — TV by Numbers' cancelation/renewal predictor — has Marry Me labeled as Bear Chow. That's really not good, folks.

It is admirable that the show has hung on so long, but to those who aren't tuning in, hear me out: There are so many reasons to love Marry Me. Casey Wilson and Ken Marino have both been in some of your favorite comedic shows (Wilson was in Happy Endings, Marino Party Down and Veronica Mars) so they definitely have the comedy chops to hold a show. But no matter how funny they are, on the ratings side of the fence, Marry Me hasn't been able to hold a candle to the other series airing in the same timeslot.

If NBC's pleasant sitcom is canceled this spring, there are certainly a number of things I'll want to see resolved. First, I think we deserve a wedding for Annie and Jake, although that seems like an endgame for the series (which might be soon, so...). The chances of seeing Annie and Jake's wedding seems bleak, but that doesn't mean we won't see a wedding at all. Annie's dads, the Kevins, are also set to wed on the show, so maybe we can see a wedding from them before the show gets the ax. Also, Dennah and Gil are bound to get together, right? Right?

If NBC really wants to stick to the "for better or for worse" concept that the show revolves around, they could just keep the show on air (just for me? pretty please?), because Annie and Jake are just too good to lose so soon.