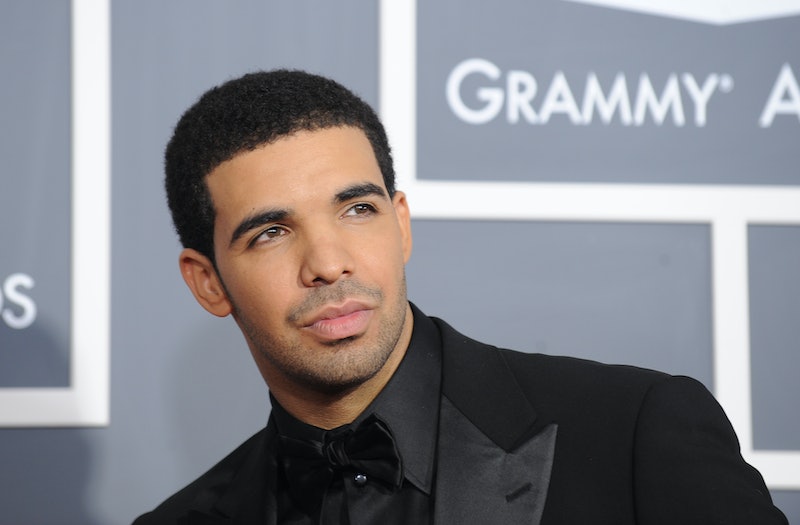 In case you've been living under a rock, you probably already know that Thursday night, Drake released a surprise album with absolutely no prior warning, just like Beyoncé or something. Titled "If You're Reading This It's Too Late," Drake inconspicuously dropped the album with a single tweet that linked to the download on iTunes. I'm certainly thrilled to find out that Beyoncé's method of album release is contagious — because really, the world could use more of her methods of living life — but 17 new Drake songs is a lot to digest, especially when I didn't see it coming. Fortunately, this is a good problem to have, and track by track, we can do this, guys! First things first: Decoding Drake's lyrics to figure out who his songs might be about. And right now, I'm wondering about the track that features Travi$ Scott: "Company." Specifically...who is Drake's song "Company" about?

Being that the album has been out for less than 24 hours, it's not like Drake has done a ton of press just yet — as in, any. So to crack this mystery, I have only the lyrics to rely on — and those lyrics? They're totally drawing me to believe that the subject of the song is Drake's rumored 2013 girlfriend, Cyn Santana. Being that I'm not exactly an authority on all things Drizzy, I could be reaching, but hear me out: because it kind of totally makes sense that this song would be about Santana.

And in case you're unfamiliar with Cyn Santana, here are a few fast facts: She and Drake allegedly dated from the spring of 2013 until autumn, and although he has dated other strippers in the past, Santana makes the most sense because — as far as my research can tell — she's the most recent of his rumored girlfriends, and this is new music.

Okay, now that everyone's met, let's get down to business. In "Company," Drake references wanting to properly date a stripper he met, because he's looking for a girl from the south who is ready to ditch her ex and commit wholeheartedly to a new relationship. Here, read it for yourself, as told by Direct Lyrics' transcription:

I know a girl I should propose to, but we just on some different s—tShe on some up at 9AM already cookin' in the kitchen s—tAnd lately we've been fightin' on the why-you-love-the-strippin-s—tYeah, she workin' with the spatula, I know she love flippin' sh—t

Santana immediately came to mind when I read these lyrics. Reportedly, Drake met Santana on the set of a 2 Chainz music video, and hit it off right away. The next clue that leads me to Santana comes from the beginning of the song, when Drake's being rather specific about which parts of the country he'd prefer his next girlfriend come from:

Ding ding ding! We have a winner: Santana is from Houston, and strips at a club there called Dreams. BOOM. I think that does it: Mystery solved. (unless more details come out, of course, but honestly, I'm pretty confident in this theory.)