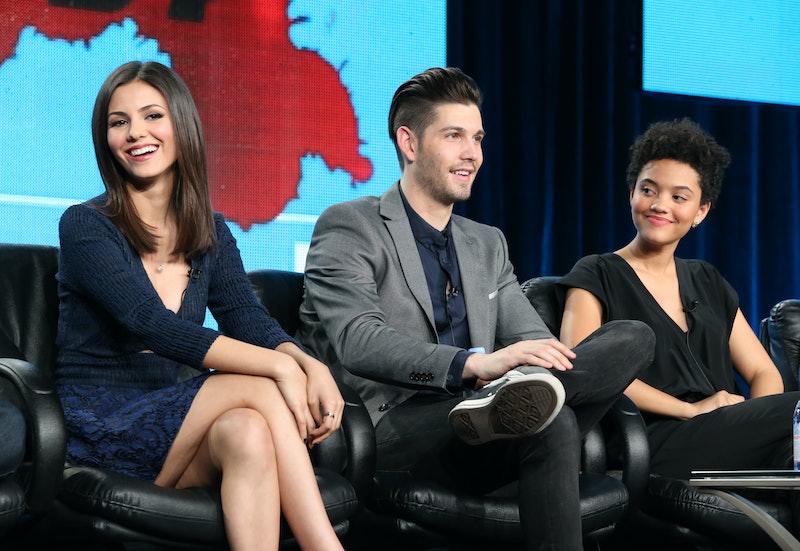 You're tearing me apart, Eye Candy. MTV's crime drama has pulled me in a million different directions over who the show's Big Bad — a.k.a. the "Flirtual killer" really is. I've flopped back and forth between Tommy, Lindy's adorable cop love interest (she doesn't know it yet, but we know it's gonna be a thing) and Sophia, Lindy's BFF who might be the killer, as she seems just a tad too invested in her friendship with our heroine. So what's a fan girl to do? I decided to go back to the source, R.L. Stine's novel Eye Candy , to see what the ending could tell me about the fate of these characters. What I found had me questioning whether MTV is totally messing with us, or if they're going to pull a Pretty Little Liars on us all. (Spoilers for Pretty Little Liars book series and TV show as well as the Eye Candy novel ahead.)

The R.L. Stine novel seems to support my theory that Sophia could indeed be Lindy's cyberstalker. In the novel, Lindy has a pal named Ann-Marie, who sets up a personal ad for Lindy so that she can score a date, much like Sophia does for Lindy on the TV show. After book Lindy goes on these dates, someone begins stalking her, and her dates are the prime suspects. But despite the many crazy dudes that are viable suspects for the stalker, the person who ends up being truly evil is none other than Ann-Marie, Lindy's BFF and roommate. Hmm... sound familiar?

If Eye Candy does follow the book series — albeit loosely, as the show is already diverging significantly from the source material — Sophia could be the Flirtual Killer. If you think it's not possible for an audience to believe that a dedicated BFF like Sophia would actually be capable of such heinous crimes, just look at what happened on Pretty Little Liars. Mona, Hanna's BFF, was revealed to be A, despite two seasons of best friend loyalty under her belt. In the Pretty Little Liars book series, Mona was also revealed to be the dangerous stalker, which makes me think that Eye Candy could pull the same trick on its audience.

Since Eye Candy is already diverging from its source material, it would be cool to see the show bring back a major plot point from the novel. Even if things don't play out exactly as they do in the book (which is nearly impossible anyway, considering the differences) it would be an interesting nod to the original story — not to mention give us trust issues for years to come.