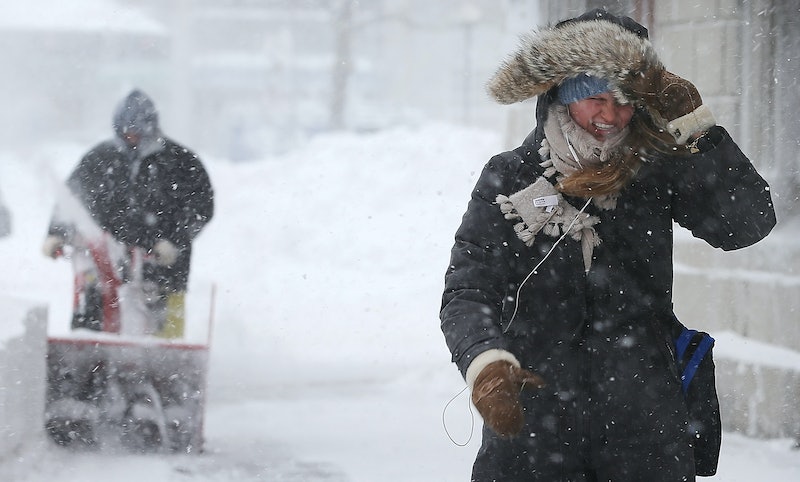 Start bundling up, East Coasters: another crazy blizzard is headed your way. According to a report issued on Friday, the National Weather Service is predicting that a massive winter storm will make its way across the eastern states this weekend. With snow totals of over 12 inches in the Boston area (and even more in northern coastal states like Maine and New Hampshire), hurricane force winds, and pounding surf, even the toughest residents might want to consider shuttering the windows and getting a few bundles of wood for the fireplace.

It's the latest in a barricade of snowy weather that has blanketed some parts of the East in over six to eight feet of snow. Of the oncoming winter storm, National Weather Service meteorologist Bill Simpson tells the Associated Press, "Snow amounts will not be as much as the previous big storms, but still, when you have 8 to 14 inches of snow, wind-driven snow, the cold air and the snow that is already there — it’s probably going to be very difficult for a lot of people."

Officials have already begun issuing regional blizzard warnings in the meantime. And even though city workers, National Guard members, and citizens have been working together to get rid of all the heavy snow, at this point, they just aren't even sure where to put all of it.

Scituate, Mass. administrator Patricia Vinchesi, told the AP that Guard members and Department of Transportation workers from New York had been assisting with the cleanup in her town, digging out nearly 700 fire hydrants and dumping snow into the nearby ocean, as there was simply no other open space left.

"We’ve sort of been in reaction and recovery mode and before we can get any appreciable degree of recovery we are in reaction mode again," Vinchesi said.

If the buzz on Twitter is any indication, local snow-bound residents aren't even angry anymore — they're just utterly and completely exhausted with it all and trying to make the best of it ("it", of course, being mother nature's frigid hissy fit, presumably over the Seahawks losing the Super Bowl two weeks ago):

Massachusetts Governor Charlie Baker issued a warning for travelers at press conference on Friday, advising them to stay off the roads at all costs in order to remain safe. "While forecasts are always subject to review, there’s no doubt that this storm will bring significant challenges to all of us," he said, reminding citizens to continue checking on elderly neighbors and helping in any small way they can. And while there are always certain emergency preparedness items that you should have on hand during whiteout conditions like the ones this weekend, one is probably more important than all the others:

According to the National Weather Service report, current blizzard warnings will remain in effect until 1 p.m. ET Sunday. So... make that two bottles of wine.