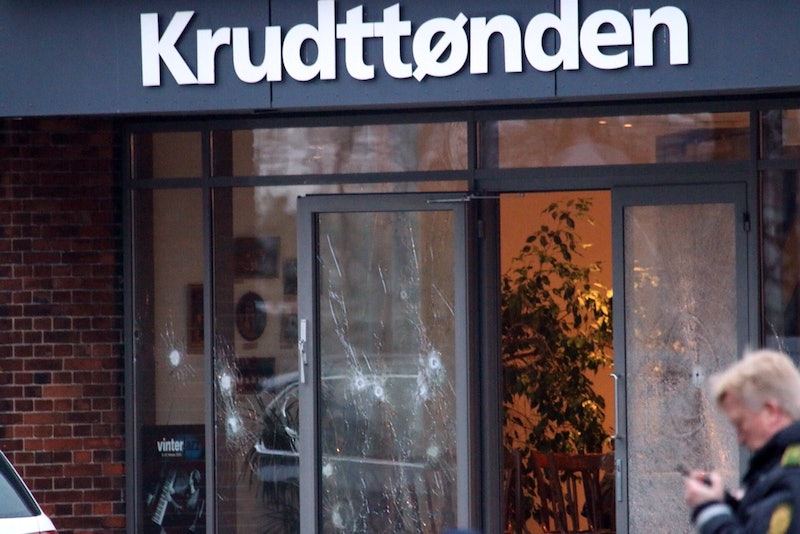 A shooting broke out in Copenhagen at an event featuring a Danish cartoonist who once drew some controversial images of the Prophet Muhammad, sparking anger in the Muslim community. The BBC reports that three Danish police officers were shot at the Copenhagen free speech debate where cartoonist, Lars Vilks, as well as French ambassador Francois Zimeray, spoke just minutes before the shots were fired.

Danish police have confirmed that at least one person has died. Two suspected gunmen remain at large. The Local Denmark reports that the person killed was a 40-year-old civilian.

The Associated Press reports that the shooting occurred at a cafe, where Vilks was holding the event on freedom of speech. About 30 bullets were reportedly fired through the windows. Helle Merete Brix, one of the event organizers, told the AP that she saw a "masked man" running past the cafe. "A couple of police officers were injured," Brix added.

Zimeray and Vilks were unharmed. The French ambassador was one of the speakers at the event, which the AP reports was called, "Art, blasphemy and the freedom of expression." Zimeray confirmed on his Twitter account that he was unharmed, writing, "Still alive in the room."

According to the Agence-France Presse, Zimeray said the shooting was similar in intention to the Charlie Hebdo attack in Paris last month. The shooting massacre, which occurred in the office of the satirical French weekly, claimed 12 lives, including several notable French cartoonists.

"They fired on us from the outside. It was the same intention as [the attack on] Charlie Hebdo except they didn’t manage to get in," Zimeray said, via the AFP.

Zimeray may have made the link between this Copenhagen attack and the Charlie Hebdo massacre because of Vilks' notorious career. The Swedish cartoonist has been known to depict the Prophet Muhammad in cartoons deemed offensive by many Muslims. One of his most famous cartoons, released in 2007, portrayed the prophet as a dog. The cartoon series incited international protests, and death threats were made against Vilks.

Everything points toward this being planned and the circumstances surrounding the shooting point toward a terror attack. The attack proves that the terror threat against Denmark continues to be serious.