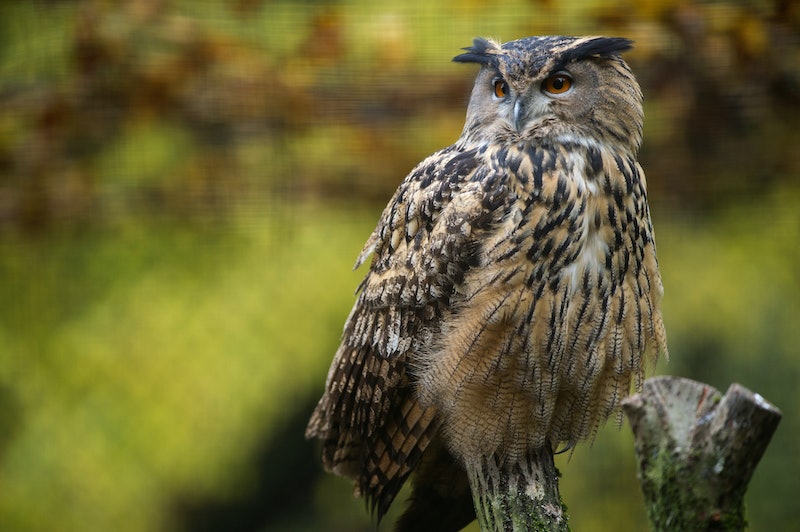 Well, this is a weird one. Hopefully the capital of the great state of Oregon can rest easy tonight, knowing they're getting a big helping hand from a certain MSNBC host — Salem, Oregon will use Rachel Maddow's owl-attack signs to alert visitors at one of its public parks, and... well, that's basically it. It's every bit as delightfully strange and amusing as you'd hope, a collaboration between a high-profile TV host and a city beleaguered by a ceaselessly determined, aggressive owl.

Here's the basic story: multiple visitors to Salem's Bush's Pasture Park have had run-ins with a thieving, rambunctious owl recently. One man, according to the AP, was struck so forcefully in the head by the dive-bombing bird that he feared he was having an aneurysm, while another got his hat nabbed right off his head. This story eventually made its way to the MSNBC airwaves, as part of Maddow's chronicling of strange Oregon news, and she had a compelling solution: put up bright-yellow warning signs showing someone being attacked by an owl.

Oh, and did I mention that this avian terror has a name? The Statesman Journal held an online vote to settle the matter, and out of a stiff field — Claws, Owlgetcha and Rachel Madowl were all options — it was Owlcapone that won out.

They're basically exactly like the traffic crossing signs you've been seeing all your life, but with a clever, foreboding twist — the little stick-figure person is hunched over, running mid-stride as a talon-bearing owl dives downward.

It's a pretty classic sort of fun, jokey image from Maddow and her staff — they've produced a lot of fun, oft-cheesy graphics through the years — but it became something even greater when Salem agreed to her idea, and opted to post 20 her signs around the park to warn visitors. So, what do they actually look like in action?

Yup, that's pretty perfect. Salem's parks and transportation services manager Mark Becktel, according to the AP, explained the move as one of simple necessity, given Owlcapone's notorious behavior.

It's just making people aware that there's an owl there that for whatever reason swoops down and goes after people's hats.

Of course, they're not quite as specific as they could be for that purpose. There's no hat involved, not even an implied risk of hat loss. The signs make it seem more like there's simply a murderous owl on the loose, which speaks to the thoroughly lighthearted nature of this whole thing. Luckily for Salem residents, it's possible things will calm down soon, at least — the AP also noted that some birders believe the owl's mating season may be contributing to its aggression, and that things may ease up in due time.