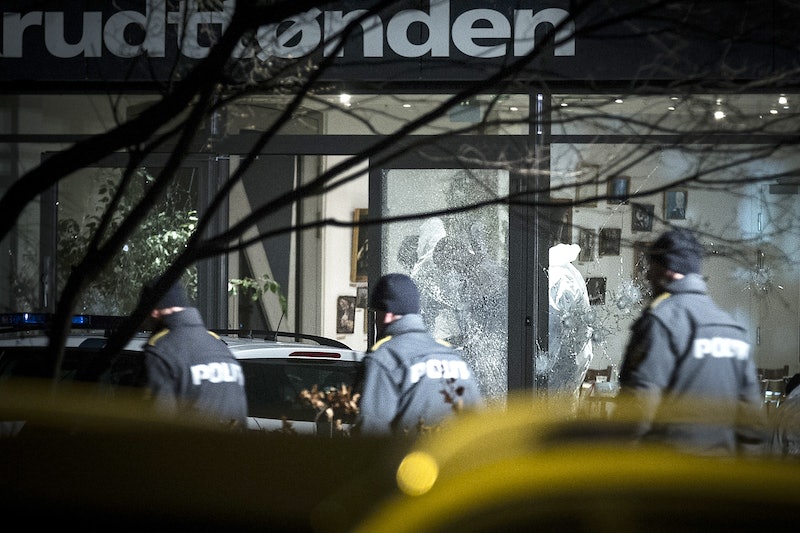 After a day of terror, police shot and killed the suspect believed responsible for the twin attacks in Copenhagen, ending the manhunt that gripped the city for several long hours after the gunman opened fire at a free speech event and then a synagogue on Saturday. The shootings, believed to be inspired by the violence last month at Paris' Charlie Hebdo offices, have left two men dead and five police officers wounded. Though the gunman has yet to be identified, he was described by authorities as an athletic individual between the ages of 25 and 30, believed to be carrying an automatic weapon. Jørgen Skov, a police inspector, told reporters at a news conference in Copenhagen that the suspect was killed after opening fire at officers near the Nørrebro station.

The first attack, which took place at 4 p.m. local time on Saturday, likely targeted Lars Vilks, a 68-year-old Swedish cartoonist who gained both fame and notoriety for his caricatures of the prophet Muhammad. Vilks, despite his placement on the list of Al Qaeda's assassination targets, has survived multiple attempts on his life. Following the shooting, the 68-year-old told the Associated Press, "I'm not shaken at all by this incident. Not the least." But the two victims of the attacks, 55-year-old film director Finn Nørgaard and 37-year-old Dan Uzan, a security guard for the Jewish community, were not as lucky.

This latest attack, the second deadly shooting in just over a month, has placed not only Denmark, but the entirety of Europe on high alert as they attempt to address the continued — and indeed, growing — threat presented by extremist forces and militant groups like ISIS and Al Qaeda. But as European Union President Donald Tusk noted, far from crumbling under such acts of terror, the violence would serve only to bring Europeans closer together intensify the fight against such forces. In a statement released late Saturday evening, Tusk said, "We will press forward with our new agreed priorities in the fight against terrorism. We will face this threat together."

The EU's security force, Europol, is also working carefully with Danish police in attempts to determine whether the gunman was acting alone, and whether other terrorist acts have been set in motion as a result of these attacks. Spokesman Soren Pedersen told reporters, "We are offering our expertise and capabilities from our anti-terrorist unit including access to our databases," with hopes of attaining as much information as possible on the attacker and his known associates.

The shootings occurred just two days following agreements between Denmark and other European unions to bolster their counter-terrorism strategy following January's Charlie Hebdo attacks, which left a total of 17 individuals dead. Still, Saturday's attacks prove just how fragile and contentious the situation in Europe and worldwide remains, as terrorist organizations and their followers continue to inflict pain and violence on ordinary citizens with a dedication to liberty and freedom.

Mirroring sentiments and reactions following the Paris shootings, many journalists and political leaders have noted a strengthened resolve to maintaining and protecting freedom of expression, refusing to stand down to fear tactics. In an interview last month with the Wall Street Journal, Mr. Vilks emphasized the need for criticism of certain aspects of Islamic culture, and insisted that the threat of violence should not deter journalists and others from pursuing the truth. Said Vilks:

Almost the entire Muslim world is subject to a theological rule that has a strange outcome when it comes to human rights. You can’t ignore that. Then you’re talking tactics, how should one go about to change that. Some say you should be very careful, but that’s just postponing the problem. Sooner or later, you have to explain what you’re criticizing.

Ironically, the free speech event at Krudttønden Cafe, where the gunman first fired at least 30 rounds into the audience, was meant to ask if artists could "dare" blasphemy in the face of growing threats of violence, especially considering the results of the Charlie Hebdo tragedy. The answer, it seems, remains a resounding "yes."

But the costs are undeniably high. While Vilks was unharmed, thanks to bodyguards who immediately took him to safety after hearing gunshots, others were not afforded the same luxury. Vilks has also told the Journal that he "can’t go anywhere without a police escort," and in 2010, he was assaulted during a lecture at Sweden's Uppsala University. That same year, two brothers were imprisoned after a failed attempt to burn down his house, and just last year, police arrested a Pennsylvania woman for plotting to kill him. She was later sentenced to 10 years in prison.

And for the Jewish community in Europe, these attacks serve as yet another stark reminder of the continued discrimination the religious group faces across the continent. Israeli Prime Minister Benjamin Netanyahu spoke out following the attacks, calling for a "massive immigration" of European Jews. Before beginning his Cabinet meeting on Sunday, Netanyahu stated, "Again, Jews were murdered on European soil just because they were Jews. This wave of attacks is expected to continue, as well as murderous anti-Semitic attacks. Jews deserve security in every country, but we say to our Jewish brothers and sisters, Israel is your home."