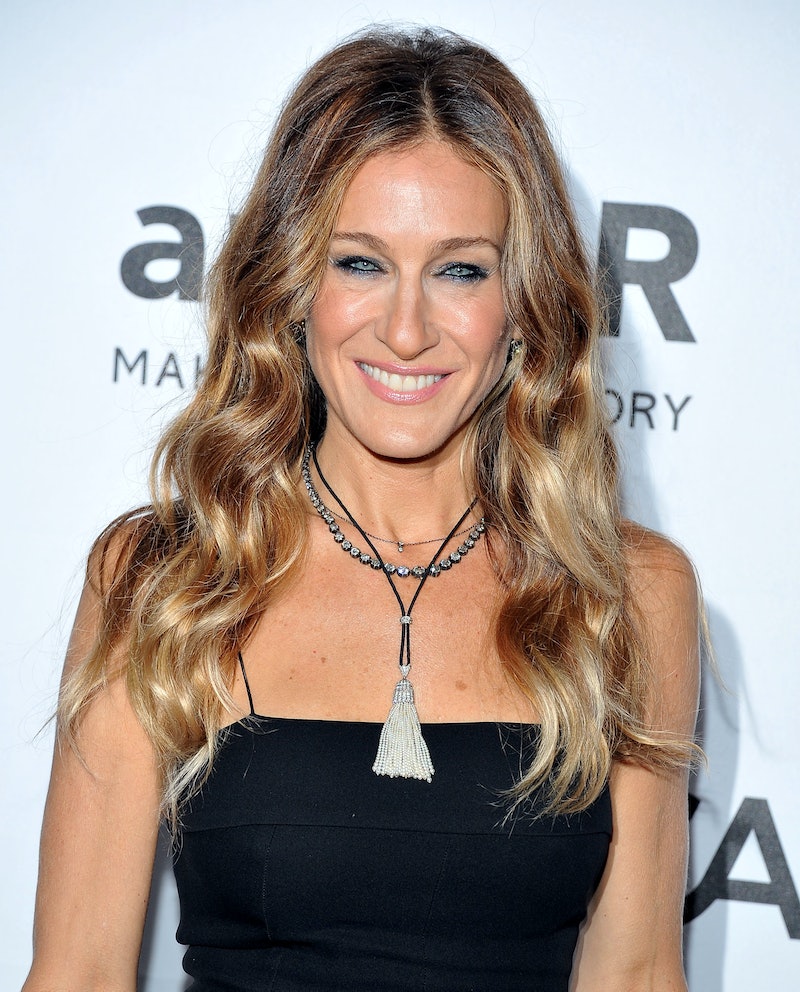 I'm sure I'm not alone in admitting that in my mind, Carrie Bradshaw and Sarah Jessica Parker are sort of the same person. I know that actors are not who they play on TV, which is probably a good thing — watching Sex and the City now definitely makes me feel like I would probably hate Carrie if she was a real-life-person. It definitely doesn't help to draw a line between where character starts and acting begins, though, when SJP is totally killing it in the shoe business. The actress has been making good use of the expertise gained from the iconic character's affinity for shoes and has been involved in designing various shoe collections in the past two years.

If Carrie was available to you at this moment, you'd probably totally want to talk shoes with her, right?! Parker was in New York this week to celebrate the launch of her latest shoe collection for label Tome and spilled about everything you'd hoped that she would to Elle Magazine: Namely, walking in heels.

Whether you're a pro at navigating even the trickiest streets or whether the idea of teetering on heels is absolutely terrifying, SJP has your back — including all the advice you'll ever need about those damned cobblestone streets meeting your stilettos.

Know when to be ambitious and know when it's a losing game: Even SJP doesn't usually wear heels in the winter. She tells Elle: "I try to be pretty strategic about where I'm putting my foot down in New York City. Because black ice can trick you, in the West Village especially! It can get you!"

Okay, we've heard the horror stories and been warned about 100 times, but it bears repeating: Pay attention to where you're going. "We typically walk down the street and we're doing a lot of other things. We don't look down. But when you get into heels and go onto cobblestones, you have to choose where you step," Parker says.

The trick to walking on uneven surfaces is to step strategically. I mean, Parker is a pro and told Elle that she spent time on the allegedly infamous cobblestones in Rome. Her takeaway trick? "What you have to do is actually place your foot in between the stones."

4. IT'S NOT EFFORTLESS, IT JUST LOOKS LIKE IT IS

If you've been feeling like a bad adult because you are just not as graceful and effortless with heels on your feet as Carrie Bradshaw is, know that careful planning and lots of practice made that happen. "Oh no, it's definitely not effortless. But when you're on film doing it, it should look effortless... We did usually rehearse, so I could get the lay of the land," she divulged. So don't beat yourself up, but throw on your heels and get out there and practice!