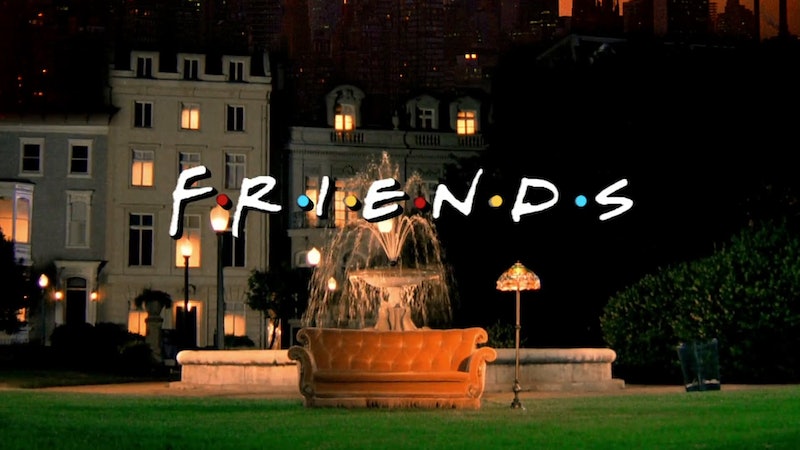 For someone who considers herself a relatively active person, I sure do binge-watch a lot of TV shows. I mean, its super fun, its super cheap, I’m a homebody, and like many people during the winter, I usually only leave my apartment when I have to make money, buy food, or force myself to exercise. I have warmer feelings for Netflix and Hulu than I do for most humans, I’m insanely close to signing up for HBO Go, and I may or may not have watched shows via sketchy websites just so I wouldn’t have to wait for them to air on normal, safer ones. I’m a TV junky all the way.

So, naturally, I’ve seen a lot of TV show intros. Some of them are just way too long. So long that even though I love the actual show, I can’t seem to fast forward through the intro fast enough (cough, cough, Game of Thrones). Some of them are watchable — but don’t do their shows justice, and are right there on the verge of annoying (ahem, How I Met Your Mother).

Okay, so I wouldn't watch this intro on repeat for sure. It feels a bit long and repetitive in spots, hence it's ranking. But I still feel like it's a classic. I'm not sure if it's all that delightful spray-paint, or if it's the fact that Will Smith is rapping the entire time, or if it's just because of my long-standing crush on the actor himself — but this intro simply had to make the list.

It’s the song, really. “Little Boxes” is just the ideal mixture of somewhat creepy, and as it’s used in the Weeds intro, more than somewhat satirical. It sets the tone for the whole show, and it’s actually quite pretty.

As someone who has worked in an office, I never thought images of people using phones, shredders, and water coolers could bring me so much joy. But The Office intro makes me start smiling before the real comedy even begins. And although I’ve always thought The Office’s theme song is crazy loud compared to the rest of the show’s audio, I also feel instantly happy when it starts to play.

This intro is loud, upbeat, and bright — just like Mindy. I start dancing every time I hear it. Plus, it features almost every character while somehow managing to be short enough that I don’t even consider skipping over it.

Even as an impatient, TV-obsessed child I enjoyed watching this intro. It's the perfect length, it's super colorful, and the illustrations are dope. Plus, the mixture of jazzy music and perfect cityscapes make this intro feel like the start of an adventure — not just another boring prelude to sit through before the show starts. Although Helga's near-constant cry of, "Hey Arnold" does border on annoying, I still think this is one of the best TV show intros of the 90's.

Even as a grown-ass woman I adore this intro. It's like watching a rainbow explode while the sky is raining glitter. Its just that cute and colorful. More importantly, I love this intro for actually giving us the girls' origin story. And for showing that girls can be super-tough, genetically-engineered superheroes — and still rock bows in their hair.

I’m pretty sure no show in existence can boast having a more feel-good intro than Friends. The theme song captures the essence of the show 100 percent, the claps are always timed perfectly, and all that physical comedy and good-hearted splashing in the fountain is just fun to watch. There's a reason we all know the words to this one.

The Broad City intro is short, sweet, a little different every time, and colorful as hell — just the like the show itself. I don’t think I’ve ever seen an intro as short as this one, but it fits the show perfectly. And since it’s a different set of trippy colors and designs every time, I never skip it.

Never has what basically amounts to an average morning routine been so disturbing to watch. Yet, I could never seem to look away. There’s something oddly sensory about it. Plus, you know, Michael C. Hall is a fox.

This intro makes images of the most harmless things (the abandoned teddy bear in season one’s title sequence, the pocket watch in season four’s, etc.) look absolutely terrifying. And the second The Walking Dead’s theme song starts to play, I legitimately feel like I’m surrounded by zombies. The whole fantastic, post-apocalyptic experience of the show starts before the episode even begins. It’s the perfect way to brace for the ensuing chaos that is Rick Grime’s life.

Much like Matthew McConaughey's portrayal of Detective Rust Cohle, this opening is astonishingly artistic and hauntingly beautiful. I couldn’t stop myself from watching the whole thing before each episode no matter how suspenseful the first season got. And it got pretty dang suspenseful.

I love everything about this intro. In the later seasons, I think it was actually better than the episodes. The song, “Bad Things,” combined with both classic and frightening images of the Deep South makes this title sequence just the right mix of darkness, danger, and Southern grit — like the show itself.