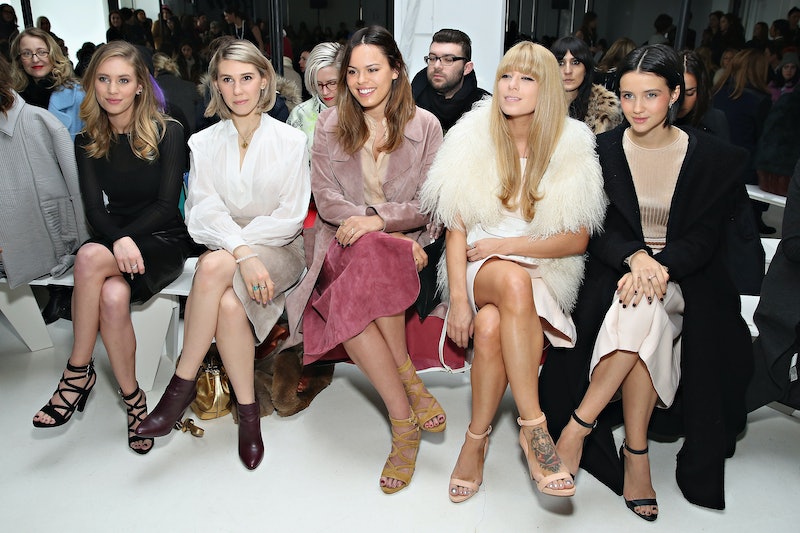 In an article for NY Mag yesterday, writer Allison P. Davis made something of an observation about the ladies front-rowing Jill Stuart's New York Fashion Week show: From Girls actress Zosia Mamet to fashion muse Alix Brown, nobody was wearing any tights. For those of you lucky enough not to be on the East Coast right now, you might not be aware that Valentine's Day 2015 was one of the coldest days of the winter — with temperatures never quite going over 15 degrees, but feeling sub-zero pretty much the whole day through with wind speeds that could blow even me and my plus-size booty over. Black ice covered the New York jungle, whilst remnants of dirty, brown snow decorated street corners. In other words: It was kind of a mess out there, and definitely an occasion to break out the wool tights and L.L. Bean Duck Boots. But for Fashion Week royalty, these winter musts were exchanged for stilettoed sandals, summer pastels and [totally] bare legs.

According to Davis, this particular girl group (looking like "the clique you used to avoid in high school to protect your self-esteem") is symbolic of a kind of human hierarchy. She writes, "The more famous you are, we realized, the less likely you are to wear tights in cold weather. It’s not even simply about having a driver — it's about knowing you’ll never have to wait in line or be concerned with basic human needs like keeping yourself warm, because someone else will always be there to provide for you."

Okay, that's a pretty big claim. I mean, everyone gets cold, right? And no matter how famous you are, not wearing tights in a New York winter is going to be painful as all hell. But I'd be lying if I said that it didn't bother me that the majority of Fashion Week goers this particular season sacrifice their personal comfort and even their health just to look pretty. Thinking about it, though, it's not really that much different than what women do to themselves all year round: From wearing heels to Spanx to push up bras so tight that you totally understand why Keira Knightley fell over that wall in the original Pirates of the Caribbean film. But you know what — it's their choice. I have to believe that these powerful women aren't baring their legs because they feel they must — but rather, because they want to. The fashion statement they want to make — the image they want to put out to the world — is one that, I guess, doesn't require tights. That being said, it's still rather silly. And cold. And unpleasant:

See here, for instance: Zosia literally looks like she's headed to a spring getaway in a Grecian isle. Pastel nudes and bare legs speak to a romantic island — not so much to [seemingly] sub zero temperatures.

One Management model Atlanta de Cadenet Taylor stripped down to suede boho fabrics and pretty pastels perfect for festival season in Britain. But a New York winter? I don't think I could survive that high slit.

Model and actress Dylan Penn killed it in all-black (a New York staple, of course). But her bare legs and heeled sandals were so not ideal for the black ice and snow slush coating Manhattan streets right now.

The actress and ballet dancer was a little bit more dressed for the season than her other Front Row friends. But still, there are no tights in sight. Just bare feet in a pointed sandal heel that I could never walk in — rain, snow or sunshine.

There's a reason Alix is a bonafide DJ, musician and fashion muse. Everything from the button detailing on her dress to her fur accents screams NYC fashionista. But really — this is February in the city. Please, put on some cozy knits.