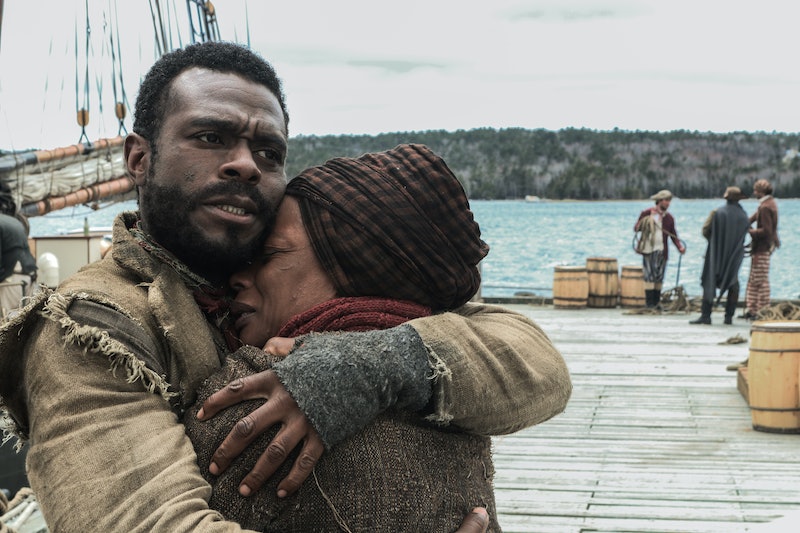 BET is trying to follow in the footsteps of Roots and other television experiments by creating their own historical drama, adapted from a novel by Lawrence Hill. So, how long is The Book of Negroes miniseries? You don't have much time to catch it. Starting on Feb. 16, the series will air over three consecutive nights, two hours per night, for a total of six one-hour segments. So it's much more of a classic miniseries than some of the cable shows like Fargo that compete for miniseries prizes. Instead of 10 or 12 episodes that air over the course of a few months, it's a short, self-contained story that will be completed by the end of a few nights. And hopefully, it's a good treatment of the material.

It's such a short period of time that I'm sure you'll get plenty of opportunities to rewatch it over and over again — BET already runs Roots during every holiday break, because they must know how impossible it is to turn it off after watching five minutes of LeVar Burton or Lou Gossett, Jr.'s performances. I'm sure to celebrate the remainder of Black History Month and beyond, they'll be reairing The Book of Negroes non-stop. Trust me, this will not be the last time you're seeing this miniseries.

I'm actually excited to see this type of show returning to TV, because with all the redefining of miniseries going on right now, with all the "limited series" and anthology shows, we've been missing out on the classic miniseries. Here are some of the better inspirations for The Book of Negroes that you can still check out.

Roots (on BET Pretty Much Always)

It's pretty obvious that any historical show that covers the life and death of black American slaves owes a lot of Roots, the seminal adaptation of Alex Haley's novel/family autobiography. Casting popular actors of the '70s as white Americans who sold, traded, owned, and passively endorsed slavery helped the country start a conversation about its past.

HBO's John Adams series also covers the Revolutionary War period, albeit from the POV of the white landowners who were benefitting from the change in power, rather than the slaves who were offered a route to freedom by fighting for the other side. It almost helps to contextualize what's going on in The Book of Negroes.

Sons of Liberty (On Demand)

And if you're looking for a recent miniseries that covers some of the same ground, the History Channel's Sons of Liberty gave a primer on the rebel colonists who formed the Continental Congress.