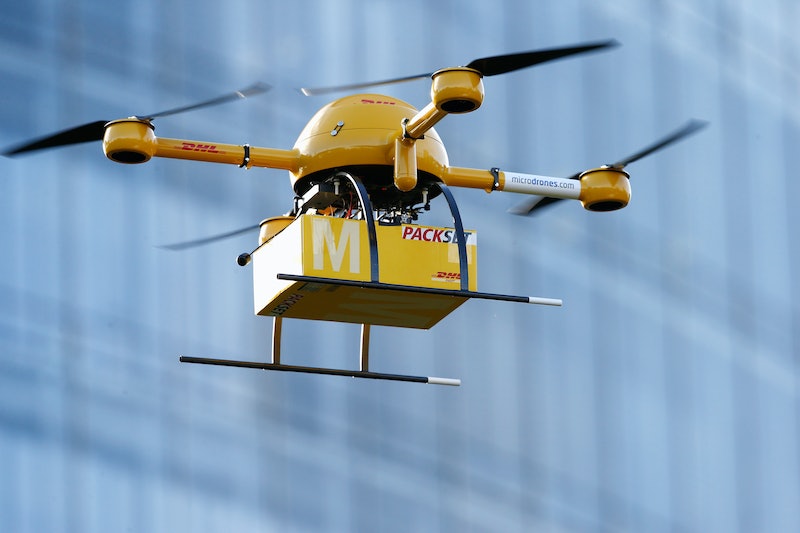 Following last month's embarrassing drone crash on the White House lawn, on Sunday the Federal Aviation Administration proposed a new set of rules for drone use, including restricting most to daylight operation hours, and a requirement that operators have to be able to see their drones at all times, according to The Washington Post. Transportation Secretary Anthony Foxx said in a press release announcing the proposal:

Technology is advancing at an unprecedented pace, and this milestone allows federal regulations and the use of our national airspace to evolve to safely accommodate innovation.

The proposed rules could open up airspace for many commercial uses, according to the FAA release. Operators — that is, whoever is flying the drone — would have to be at least 17 and pass a test. In order to fly a drone or "unmanned aircraft system," as the FAA refers to them, an operator would need to be certified by the FAA and be retested every two years.

The White House took the rules a step beyond the FAA's proposal for commercial drone usage, issuing a presidential memorandum that outlines drone usage requirements for government agencies. Under that directive, any federal agency flying drones would have to publicly disclose what they do with the data they collect and where the drones are flying.

The FAA also wants to limit how high from the ground drones can travel: no higher than 500 feet, with a speed limit of 100 mph. Drones wouldn't be approved for flying over people unless those people were involved with the flight, according to the press release. And dropping an object from a drone would be prohibited under the FAA proposal.

The proposed rules have worried some companies that planned to use the unmanned aircraft for deliveries. A little over a year ago, Amazon announced its plans for Prime Air, or delivery by drones. Amazon CEO Jeff Bezos told 60 Minutes at the time that the company could make deliveries to customers within 30 minutes of their orders.

If the proposed FAA regulations, which are unlikely to go into effect before 2017, hinder the plans for Prime Air, Amazon might take the technology outside the country for development, according to The Guardian. An Amazon spokesman told The Guardian on Sunday that the company was "prepared to deploy where we have the regulatory support we need."

Many drone companies and users seemed happy that the FAA's proposed rules don't require stricter licensing for operators, according to the Post. But some legal experts said the rules for federal agencies set forth in the presidential memorandum are not specific enough, leaving how the data collected by government drones is used too open for interpretation, The Guardian reported.

For now, the FAA's proposed rules are open to public comment on the FAA website for the next 60 days, and it plans to hold public hearings as well. The agency wants to hear, for instance, whether the line-of-sight rule is reasonable, and if not, what an appropriate distance would be. FAA Administrator Michael Huerta said in the news release:

We have tried to be flexible in writing these rules. We want to maintain today’s outstanding level of aviation safety without placing an undue regulatory burden on an emerging industry.