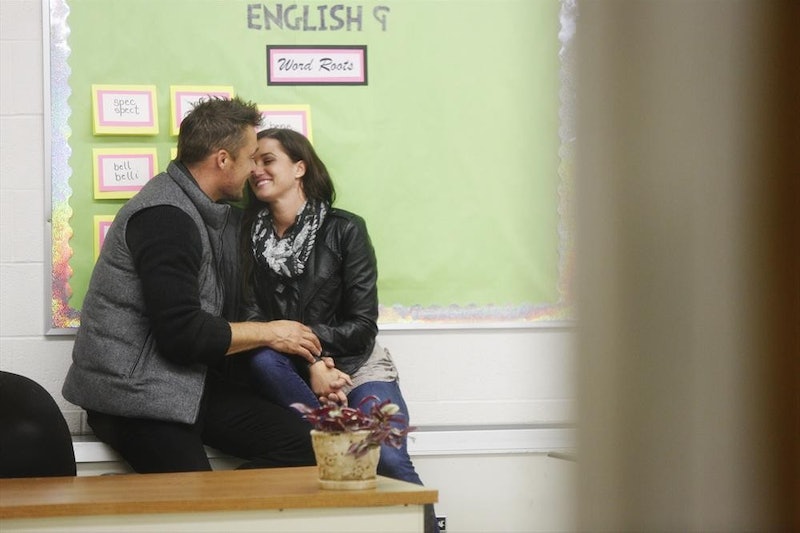 During Monday's Bachelor episode, Jade Roper came clean about her Playboy past and Chris Soules reacted in a really surprising way. I totally expected him to be a jerk about her nude modeling, but he was amazingly supportive — and that's really important because Chris' past isn't totally squeaky clean either.

Jade was really nervous about telling Chris that she'd posed nude, but she needn't have worried. Chris viewed the photos with her and then let her know he didn't care in the slightest. He launched into a sweet speech about how her past didn't matter to him

I judge you for the person that you are and why you're here. Something like that would never make me feel any differently about you. Don't feel bad about that. You're a beautiful woman and that's not something I feel would affect our relationship. I know you for who you are as a person and I respect you.

He even went so far as to state that it wasn't a deal breaker and that if she were his soul mate he'd stand behind her no matter what. That was a really important attitude for Chris to take, because he has a troubling past himself. As it turns out, our all-American farmer boy Bachelor has plead guilty to 13 criminal charges, and in 2005 he was even charged with a DUI.

His lengthy rap sheet isn't something the show has addressed, which is unfortunate since they seem really eager to hash out all the women's pasts from virginity to posing for Playboy. But Chris knows what he's done, and even if he hasn't admitted it on camera, we know too. So it was really encouraging that he didn't judge Jade outright for her nude modeling past.

In fact, I was so impressed with Chris' response that I was ready to start to like him more, but then he ended up sending Jade home. Yep, not long after gushingly reassuring her, he sent her packing. He told her it had more to do with how "things have moved faster with some of the other girls" than what she just told him, but the timing is a little suspicious.

Frankly I don't understand how he could have such a heartfelt response to her Playboy past, and then send her home the next minute. Chris continues to mystify me with his words and actions, but all I have to say for Jade is that she deserves better anyway. You keep on doing you, girl, and don't let anyone judge you for who you are or you you used to be.