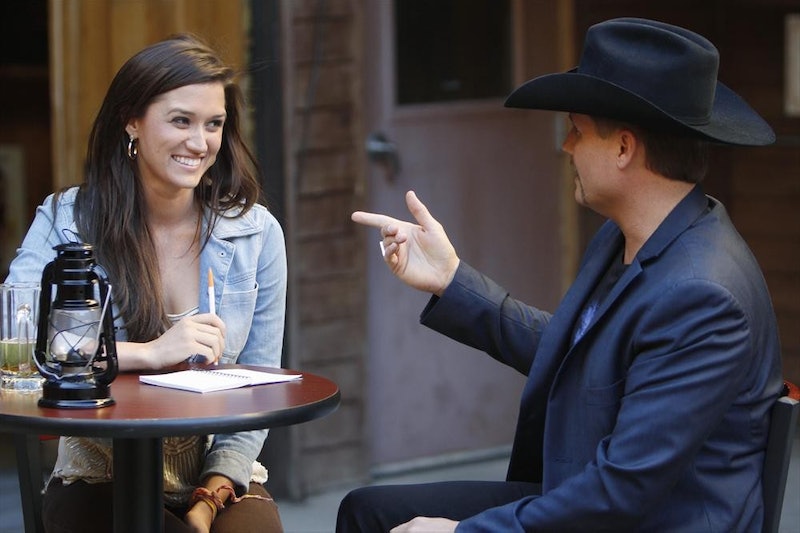 On this season of The Bachelor, Jade's been keeping a secret, but it's something most of the show's obsessives (like me) have known all along. Long before Chris Soules even thought about handing over that first rose, the internet was already buzzing about the fact that in the past, Jade has posed in nude photos for Playboy and that it might rock conservative farmer Chris' world. At the time, I had no idea if this was something Jade would be open about from the beginning or not, but halfway through the season, we've found out that she's decided to stay pretty tight-lipped about the whole ordeal. Which is totally fine — what she chooses to divulge to Chris (and the millions of people watching at home) is obviously her decision. On this week's episode, it seems that Jade has decided to tell Chris about her past, and according to ABC's promo, Chris will be totally shocked by Jade's Playboy past. So how will he react? Would Chris eliminate Jade from The Bachelor just because she's been naked on camera before?

At this point, I really feel like it could go either way — and I will be incredibly disappointed in Chris if the Playboy thing makes him take Jade out of the competition, especially after last week's episode didn't exactly show Chris in the best light. And if Jade does get sent home after trusting him with her past, it'll be glaringly obvious that that's the reason why. Everything we've seen of Jade and Chris together so far shows that they make a really good match, most importantly that Chris' sisters liked her enough to give her the Cinderella date. She's a sweet, awesome girl who even told Chris that she can see herself living in his tiny little hometown with him. If he stops giving her a fair chance because of a few nude photos, he'll be making a huge mistake.

Sunday night, Jade told Carly her Playboy secret, too, and I can't help but wonder if their opinions are going to affect Chris' take in any way — not that they should, but Carly did tattle on Britt at the ice rink on Sunday night. She could do it again, just like Ashley I. took it upon herself to fill Chris in on how fake Kelsey was, and just like nobody took issue with voicing their opinion on Jordan re-entering the game, even if it made them seem petty. I hope we don't see women bashing other women over something like this, but I'm not ruling it out.

And honestly, it's 2015. It's upsetting enough that ABC wanted to make such a big deal out of virginity this season, so it would be even worse if Jade posing for Playboy becomes a "thing" to Chris. Obviously, it's his prerogative if he doesn't want to marry someone who can be seen nude on the internet, but all that will do is prove that Chris really isn't the right person for Jade.