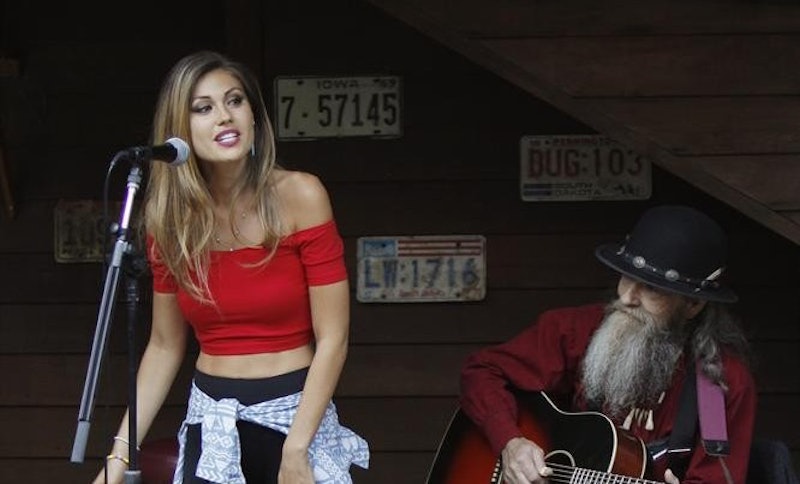 On Sunday's Iowa-themed Bachelor episode, the women took a secret road trip to Chris Soules' hometown of Arlington to get a feel for the place. And when they got to the 400-person town, Britt immediately realized Arlington, Iowa wasn't for her. But then she changed her mind later, drawing ire from Carly. "There's not even a restaurant in this town," said a concerned Britt as they stood on the desolate main street. "I don't see myself living here."

But then on the drive back, she miraculously changed her mind, which infuriated Carly. "This is gorgeous country though, and I'm not going to be kicking it on main street. I'll be, like, in a house," Britt tried to reason. "I kind of changed my mind on the way back."

This basically broke Carly, who is very invested in Chris, and is very uninterested in women staying who might not be there for the right reasons. "She is one of the fakest people I've ever met," Carly said about Britt. "She basically was like, 'I saw a sunset and now I love it here!'" Then Carly took things up a notch by drawing lips on her hand and turning it into a puppet that exclaimed, "I'm Britt, and I'm a liar!"

I'm not sure either woman is handling things well right now, and I don't know if Britt is really cut out for Arlington. But I do know that Chris is not about to move, so if she doesn't like it, she better fess up soon. Or she better learn to really, really love those sunsets as a consolation prize.

The tension between the two women escalated when they were invited on a group date together and Britt immediately stole some time to tell Chris how much she loved his town. "At first I was like, 'This is so small. I don't know what I would do there," she started. But then she explained how the sunset changed her mind. "The sun was setting and there were all these little homes. I felt really alive there. I fell in love with it. It's so beautiful there, I really loved it. I'm really glad I went."

Chris, of course, ate this all up because he's really worried about finding a wife who loves his hometown. But inside Carly was fuming that Britt was lying to Chris since Britt had previously told Carly and Kaitlyn she didn't like it there. After a while Carly decides she can't handle it anymore and confronts Chris about Britt's alleged lies.

Chris eventually decides it's time to confront Britt about Carly's accusations, but naturally Britt says the same thing all over again. Chris seems pretty satisfied with that conclusion, but it's easy to see why Carly is so certain that Britt is fibbing, whether it's to herself or to Chris.