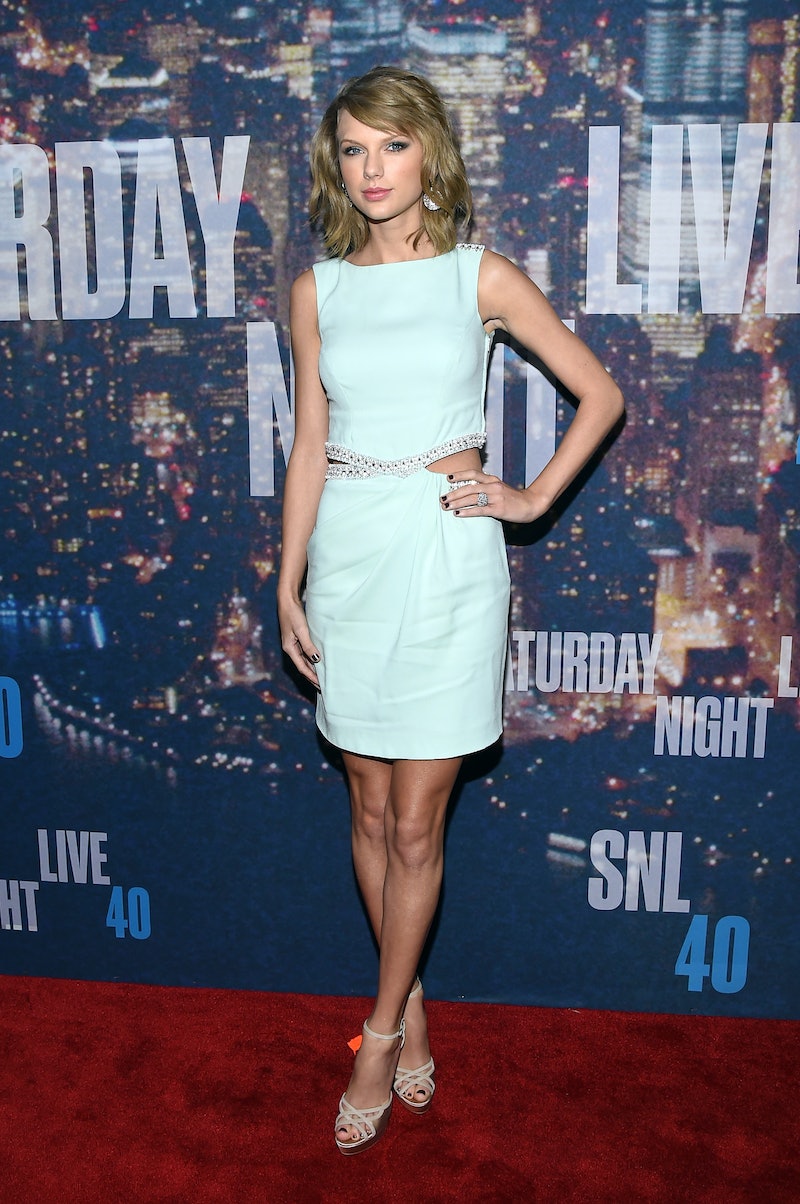 There are a few things Taylor Swift probably expected to happen when she signed on to take part in SNL 40 , the three-hour anniversary special of the show that aired Sunday, Feb 15. For one thing, she must've figured she would get to kill it in a sketch alongside some comedy icons. For another, she probably assumed she'd get to perform, alone or maybe in a duet with someone she greatly admired. She definitely thought she'd get to meet some amazing people while there. After all, this was SNL 40, and she was Taylor Swift, queen of pop culture and spur-of-the-moment friend-making.

So did the singer's night go as planned? As anyone who tuned in to the special saw, not quite. Sure, Swift got to be in a skit, and yeah, she got to perform, and, yes, she got to meet some very interesting new people, but the situations were likely a whole lot different than what she'd had in mind when she agreed to take part. I'm sure she still had fun — how could you not, at an event like that? — but I wouldn't be shocked if she had at least a few moments of "oh my god, this is not happening." Here's what I imagine Swift thought about her night at SNL 40:

"Man, Kristen Wiig is the coolest. Like, who doesn't love Bridesmaids, am I right? And Kerry Washington's here?! This is the perfect time to tell her that I'm naming my next cat Olivia Pope!"

"I'm supposed to be playing a crazy, ridiculously dressed actress, but I just look like I did during all of 2011...? This is weird."

"You know, I really hope they don't start slut-shaming Betty for this. This is such a way to start rumors."

"Why didn't they laugh more, Emma? What did I do wrong?" "I don't know, Tay, maybe just hide under my Gilda wig for awhile?"

Taking Her Seat In the Audience

"Alright, Taylor, just shake it off. At least now you'll get sit next to amazing peop — oh no. Oh, dear God."

Thinking of Things To Say to Sarah Palin

"Are you liking New York? Seen any good shows? Have you — oh, forget it. I'm having a word with Lorne later."

Going to the Afterparty

"Breathe, Taylor. This is your forte. Wear a cute dress, bring your friends, and avoid John Mayer at all costs."

Performing "Shake It Off"

"Jimmy, I love you, but if you pull a Betty White and steal my thunder on this stage tonight, I swear I will get Kanye on your ass."

"He likes tall blonds and boats, I like brown-haired actors and going to the Oscars... hey, Leo, you look like my next mistake."