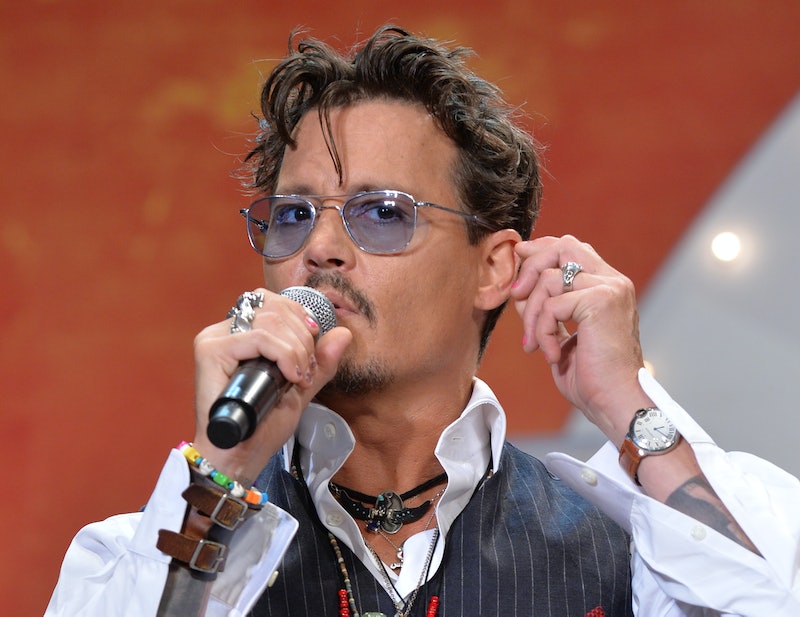 It is the dawn of a new Monday and it must be known that Johnny Depp, who previously threw shade at actors-turned-musicians, is forming a high-profile supergroup. That's right, Depp is joining forces with Alice Cooper and Aerosmith's Joe Perry as part of Hollywood Vampires, and a gig has already been booked for the Rock in Rio Festival in September. And, though it may seem a bit side-eye-worthy, rest assured this isn't his first time at the rodeo. Not even close.

As I remembered this weekend during a Valentine's re-watch of Cry-Baby (let's be real, he's so dreamy in that), Depp has been in a LOT of musical projects within the past quarter century. It spans across many platforms, whether he's at the helm of a big movie musical, making a cameo in a rocker friend's video, or contributing instrumentals on an album. And while it can be hotly debated whether this makes him a bit of a hypocrite or not (I mean, would you really see Johnny Depp live for his musicianship?), it's interesting to see how he's consistently incorporated music into his acting career.

So here's a quick run-through of some of the side-projects and high-profile films that paired Depp with his other big love (besides fedoras): music.

Cry-Baby is a movie that features Iggy Pop, Ricki Lake teen pregnant with her third child, and multiple people sucking each other's tongues. In other words, it's one of John Water's most tame films. It also features Depp in the titular role of Cry-Baby, a rockabilly rebel with the voice of an angel. Depp showcased his vocals throughout this very informal musical.

My favorite tidbit of all time: Johnny Depp was a bass player in a early '90s alt-rock supergroup called P. The line-up included Butthole Surfer's frontman Gibby Haynes, Depp's 21 Jump Street co-star Sal Jenco, and songwriter Bill Carter. They've since earned a background role in one of Hollywood's biggest tragedies: they were playing at Depp's club, The Viper Room, the night River Phoenix overdosed outside. Beyond that, they released an album in 1995 (Flea from Red Hot Chili Peppers is on it! and there's an ABBA cover!) but they never really made it a top priority.

Remember Oasis? They did "Wonderwall?" Well, true story, they did other songs besides "Wonderwall," including the song "Fade In-Out" off Be Here Now. Depp played slide guitar on that track, and also provided instrumentals on "Fade Away (Warchild Version)."

Depp does some real life guitar-strumming in Chocolat. He is literally that d-bag with a ponytail that breaks out his acoustic guitar at a party, but, let's be real — in this case, you'd probably sleep with him.

Since this has less to do with Depp's musical prowess and more to do with his acting, I'm going to lump these all together as if they were one big project. However, they're none-the-less important.

The first music video Depp starred in was in 1991, with Tom Petty & The Heartbreakers, "Into the Great Wide Open." In this piece, Depp is the protagonist of the song, Eddie Rebel, a man pursuing rock stardom. It does not go well for him.

In 1992 Depp made a cameo in The Lemonheads' "It's a Shame About Ray," a song now best known for sharing a title with a Girls episode.

Finally in 2010 Depp appeared as The Mad Hatter in Avril Lavigne's music video for "Alice." This magical romp through Spencer's Gifts was conceived to promote Tim Burton's Alice in Wonderland, in which Depp's Mad Hatter initially ran wild. It is still not his mall-goth-iest musical project yet...

The distinction of "mall-goth-iest musical project yet" may go to Depp's work in Sweeney Todd, a film by BFF Tim Burton that co-stars Helena Bonham Carter. A more straightforward musical than Cry-Baby,it is literally every Burton project, but with Stephen Sondheim replacing Danny Elfman. Depp took vocal lessons in preparation for the role, and did aggressively fine.

This is the other biggest contender for "mall-goth-iest musical project yet," although it's a lot less structured than the previous two. Depp has played guitar with various famous friends (Pearl Jam, anyone?), but it's important to note that Depp is OTHER BFFs with rock and roll's resident scary clown Marilyn Manson. Therefore, he has been known to pop up at concerts to play a song. He even shows up on Manson's 2012, "Born Villain," contributing guitars and drums to a cover of Carly Simon's "You're so Vain."

It's so nice when friends carve time out of their busy schedule to hang out.