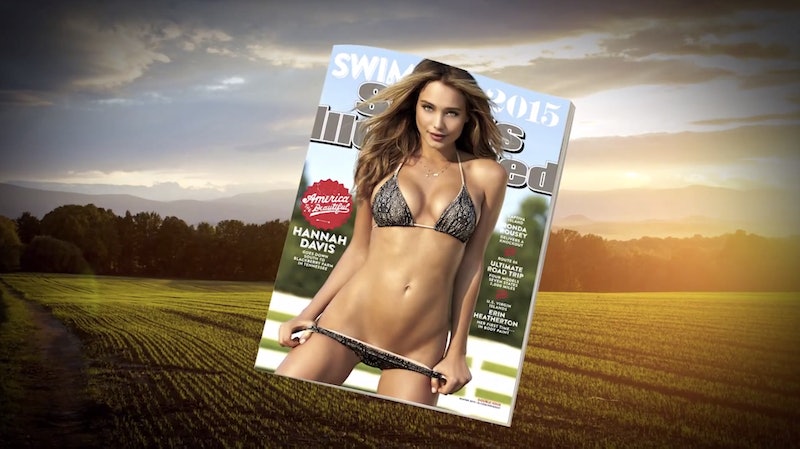 In the magazine world, the annual swimsuit edition of Sports Illustrated is pretty much the equivalent of the September issue for Vogue. It's a big deal to men, to women, to advertisers, to the media — I could go on. And, sure, it's just hot models in bathing suits, but even the fashion world takes notice of SI when the swimsuit issue rolls around; everyone is wondering which top models will grace the pages — and the cover, especially. We all pay attention to the Sports Illustrated swimsuit edition, whether we choose to admit it or not. Luckily, Last Week Tonight With John Oliver questioned the Sports Illustrated swimsuit issue, reminding us of the query we all should be asking ourselves: How is the swimsuit edition still a thing?

The segment starts by discussing the history of Sports Illustrated ("the preferred magazine of dads in the crapper since 1954"), the origin of the swimsuit edition, how we're all just sort of creepy about the whole thing every year, and finally, and most importantly, asks the big question: How on earth are we still making a big deal over this?

Each year, the swimsuit edition is announced, and we're all just perfectly OK with getting overly excited about the entire thing.

"And every February SI releases it's most popular annual issue to a creepy chorus of approval. Ew. Ewwww."

"The swimsuit edition was created by editor Andre Lagree to boost sales between sports seasons. And it was a perfect expression of the '60s, a time of such rampant casual sexism, that it eventually gave birth to the sexual harassment in the work place film."

OK, so the '60s are one thing, but really? Today? It's still obsessed over in the age of the Internet? How? That's the real question.

"Sure, at one point it was tantalizing to receive a once-annual printed magazine of scantily clad women. But people do not understand that they can just type 'naked ladies' into the Internet and see what Google throws at them?"

The video goes on to question what is left to even show in the issues. Eventually, it has to become a taboo activity to head to your local grocery store and pick up a magazine full of nude, often objectifying, sometimes culturally insensitive images, right? That's what the Internet exists for. To embarrass yourself in the privacy of your own home. So how will SI keep things scandalous as the years come? What's left to shock people?"

"The vagina. The vagina is what's left. And one of these years, in an act of desperation, SI will probably put one on the cover."

The whole video is hilarious and it makes something that has become so normalized, and even celebrated, in our society seem utterly absurd and very, very creepy. It's a laughable video, but it's also an eye-opening reminder that just because something has been around forever does not mean it should stay that way.