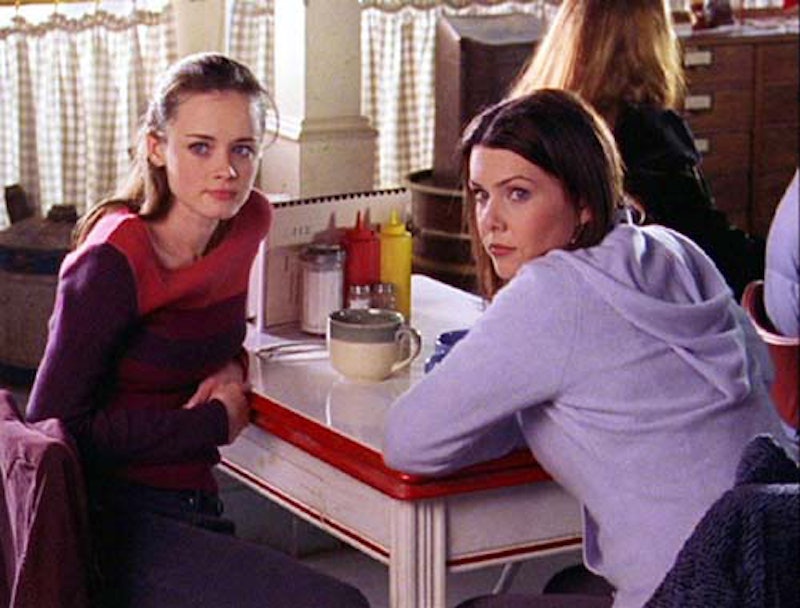 Gilmore Girls, we love you, but what the hell is going on in this scene? Fans of the fast-talking mother-daughter duo are used to Luke’s grumpy-old-man-ishness; part of the diner owner’s charm is the way his perpetual grouchiness is just a cover for his soft, sensitive, Lorelei-loving underbelly. But in Season 3's “Eight O’Clock at the Oasis”, Luke passes “lovably irascible” and instead ends squarely on “asshole.” The episode begins with Lorelei and Rory stopping by Luke’s diner and being treated to one of his usual rants, this time about a table of parents with small children (the horror!). Things come to a head when one of his customers has the audacity to start breastfeeding her baby in the diner. She’s turned away so that no one can really see anything, but Luke is appalled and begs Lorelei to intervene, insisting, “I am being taken advantage of here, and I do not like being taken advantage of.” Um, way to make a mother feeding her kid all about you, man.

In most of the series, Luke’s rants are grouchy without being mean-spirited, but in this episode his words come right out of the woman-shaming playbook:

When did that become acceptable? In the old days, a woman would never consider doing that in public. They’d go find a barn or a cave or something. I mean, it’s indecent; this is a diner, not a peep show.

His implication that breastfeeding public is equivalent to a “peep show” strikes at the core of why many people object to the practice: They see women’s breasts as always sexual, regardless of context. Even when a woman is using her breasts for the completely natural, non-sexual purpose of feeding a child, her breasts are seen as sexual objects first and foremost; and, as such, they are inherently obscene. What is nearly as maddening as Luke’s need to shame a woman for feeding her own child is the fact that Lorelei and Rory react to the whole thing with a sort of condescending bemusement. Oh, men! So silly with their fear of women’s bodies! You’d think that Lorelei, a mother herself, would have something sharper to say about it.