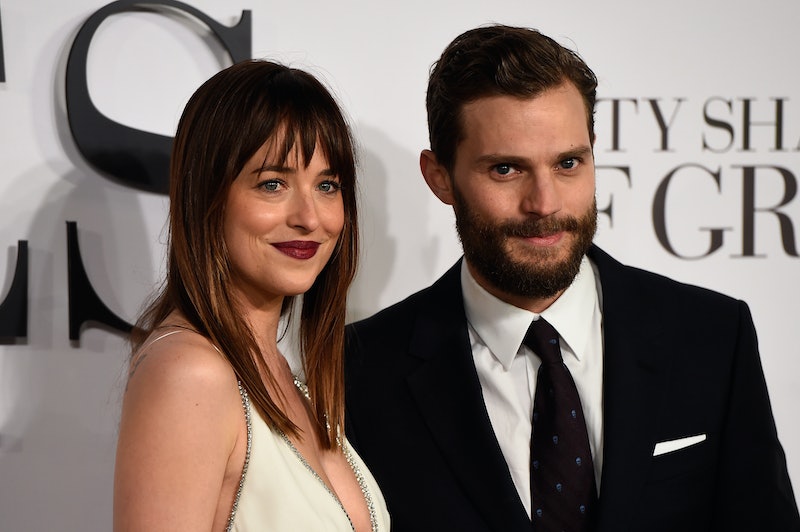 If you were one of the many many people who went to see Fifty Shades of Grey this Valentine's Day weekend, you might have found yourself wondering where the eff the chemistry was between Anastasia Steele and Christian Grey. Or maybe something a little more politely phrased; you might have been raised better than I was. But, regardless, Dakota Johnson and Jamie Dornan are so stiff and wooden around each other during the press tours that it's had more than a few people wondering if they secretly hate each other off-screen. We've done some pretty in-depth analysis ourselves, trying to get to the bottom of Dornan and Johnson's seeming-animosity.

But now we have another piece of evidence to go rogue detective on, because Dornan himself has just addressed the rumors that he and Johnson are, ahem... anything but the closest of bosom buddies. His response came about when E! presenter Maria Menounos asked him on the red carpet why people always say they don't get along, and he replied:

Look, people are going to say that because it's a story, man, and people like to create a little bit of hype leading up to the film. It's an obvious story to come up with. You know, if I was into the world of coming up with fake stories I'd maybe start to do that on a blog—no, I wouldn't. I would never become that person, but I understand why because it creates a bit of whatever and people on blogs, they love that kind of stuff.

Did you hear that, everyone? Jamie Dornan would never be that person, so look at your lives, look at your choices, and shut down your blogs.