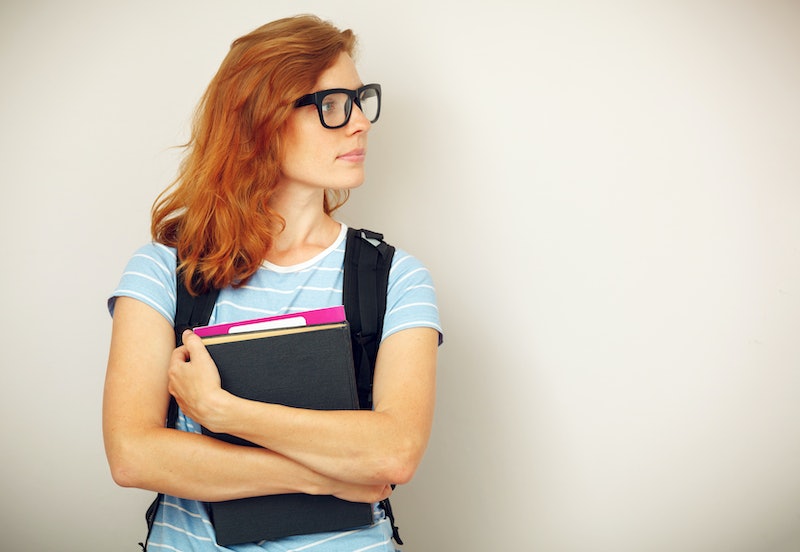 Since the dawn of spoken language, there has been "mansplaining." But while the pervasive phenomenon of men assuming women need schooling on every subject is a fixture in feminist discourse, there's less awareness of "femmesplaining," a pervasive but little-discussed phenomenon that can be equally damaging.

I define femmesplaining as one woman talking down to another woman whom she deems to be less knowledgable about something — usually feminism — in the same way a man stereotypically would when mansplaining. I know jerkdom is an equally opportunity sport, but there's something especially off-putting about being on the receiving end of a feminist lesson when it is another woman who assumes you need to be schooled. To me, there is no "right way" to do feminism, because there are too many lived experiences to subsume them under one normative directive.

To be clear, I'm not talking about providing a constructive "teaching moment" to a female friend (or stranger). Sometimes we all could use a new perspective on something, particularly a feminist issue. However, when femmesplaining is at its worst, it only serves to reveal the painful repercussions of internalized misogyny and put you in the same uncomfortable position that mansplaining does. These are just a few subjects that have been femmesplained to me when I wasn't doing my feminism according to someone else's rules.

1. How to define feminism

Beyond working towards gender equality, we have yet to come to a "final conclusion" about what being a feminist means — and I think that's great. The feminist movement should grow and change as we evolve. And yet, I have been femmesplained about the "real" facts behind feminism as if they're written on stone tablets with sacred menstrual blood. I've been told that "real" feminist truths are to be found in certain academic publications, and since I haven't read X,Y, and Z, I cannot truly understand them. I have also been told that discussions of feminism in popular culture spurred on by Beyonce, Miley Cyrus, Emma Watson et al are not "real" feminism and addressing their contributions only detracts from my individual feminist cred. And I have been told that, for so many reasons I can't even fit on this page, I am just plain "doing feminism wrong."

2. How to have feminist sex

Trying to put rules and regulations on a concrete subject (sex) with an abstract principle (feminism) is a pretty tall order, and yet I have been femmesplained about how to do it correctly so many times. And by "do it correctly," I mean have sex. I have received lectures with the following edicts: 1. You cannot be promiscuous and be a feminist, because that is disrespecting your body. 2. You can't enjoy submissive sex and be a feminist because that is re-creating patriarchal rule in the bedroom. 3. Having sex with men makes you less of a feminist than queer women who do not have sex with men. 4. Blowjobs are inherently demeaning no matter how you slice it (ouch).

3. What music is un-feminist

I'll admit, I love me some music that is considered misogynistic, including sleazy, cheesy hair metal and hip hop. I am aware of the contradictions, and I think I can be just as good a feminist with mindful consumption of this cultural material as someone who avoids it altogether. It's important that feminists speak out about music they find misogynistic, like "Blurred Lines" or that song where Rick Ross raps about drugging a woman so he can rape her. Femmesplaining me and telling me why my particular music choices are "irresponsible," is, however, not helpful. I do not need to hear how I am betraying the cause if I choose to listen to a Motley Crue song celebrating strippers as icons of femininity over a Bikini Kill song.

4. Why the word "slut" is dangerous

We all know how detrimental the "s-word" can be to women and girls. Gender-based bullying is real, and there has been a resurgence of debate over reclaiming "slut," with many high profile feminists falling on the anti-side. I am the editor of a site that uses the word carefully and subversively with full awareness of its history and multi-faceted contexts, but I still receive a lot of femmesplaining on this subject. Most often, I am told I am setting back feminism, and that I could be spurring on more gender-based bullying because writers on our site are putting positive spins on a horrific word. I also am privy to long-winded explanations of the reasons I cannot be a feminist and do this, because we now know that reclaiming words never, ever, works. There's even, like, scientific proof, I've been told (can someone please forward me links to these "studies"?).

5. What a feminist relationship is

Some ladies love to femmesplain to me the particular ways you can be a feminist when you're in a relationship with a man. Above all, you have to be with a guy who identifies as a feminist, or you're going to lose your feminist voice and be a victim of the patriarchy once more. Also, you have to violate all gender role norms within your relationship or, yet again, fail the Sisterhood. Forget about choosing a hang with your guy over a girlfriend, because that is the ultimate transgression. Chicks before...well, you know. And yet another big one I've been lectured on is the way sexuality should work in the relationship. Never, ever have sex unless you initiate, because otherwise, you are giving in to your role as submissive girlfriend, and perhaps even legitimizing relationship rape, says the femmesplainer. I feel your pain that you've been mansplained girl, but spinning it back on me isn't going to help.