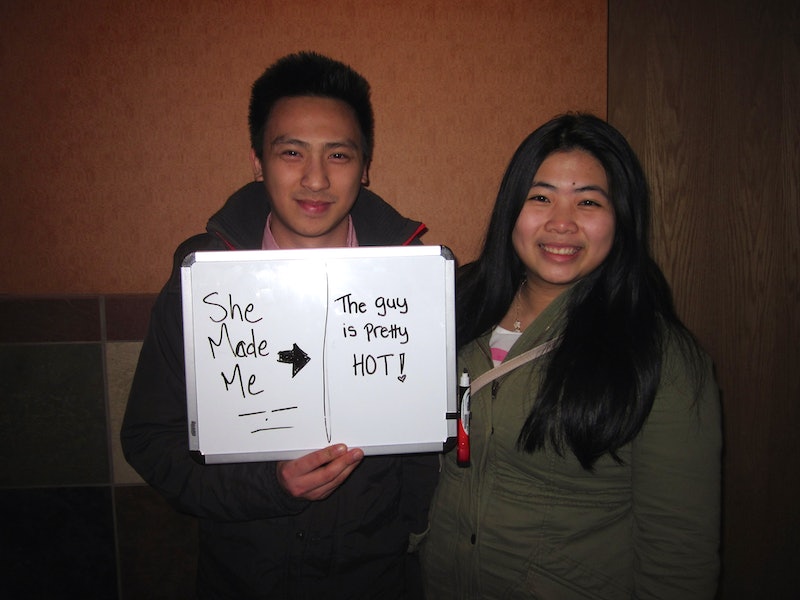 Typically, sex is something most people want to keep in the bedroom, but now that Fifty Shades of Grey is out in movie theaters, sex has become a public event. During its opening weekend over Valentine's Day, I took to the aisles and asked couples why they were there seeing Fifty Shades of Grey together. Yes, a lot of men claimed they were "forced" to come to the movie theater (I don't buy that completely) but whatever the reason, the following men and women still drove during a blizzard in New Hampshire to see Dakota Johnson and Jamie Dornan get it on.

After being denied many a-time by couples (I found that more older couples were less inclined to having their photos taken), I did manage to get a few couples to say why they were there. Some men weren't shy about revealing their reason for seeing the movie — even if they were joking about their true intentions — and most of the women I spoke to were in the same boat as I was. They had read the book and wanted to see what the movie was all about.

Here's why (some) couples went to the theater over Valentine's Day weekend to see Fifty Shades of Grey.

(And honorable mention to the pregnant couple who also made it out in the snow to the see the movie and gave the reason "Because your imagination can only bring you so far ... " Amen!)