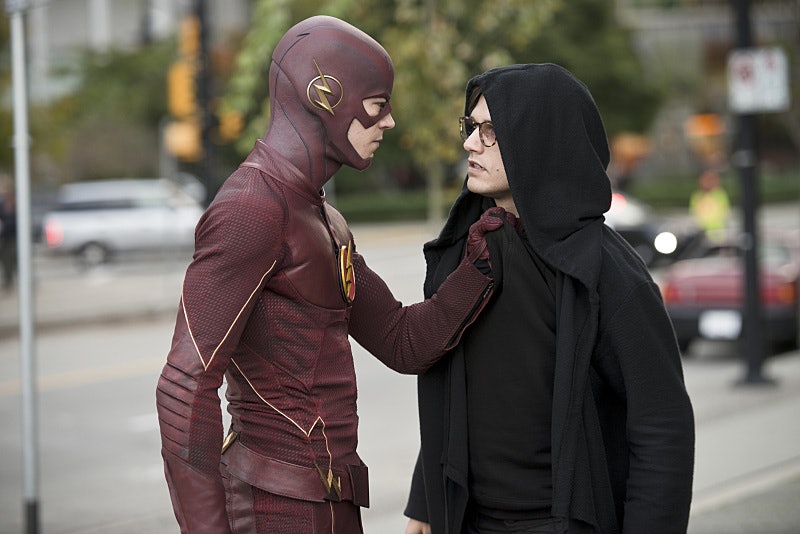 Do you ever wonder what the metahumans are up to in The Flash prison under S.T.A.R. Labs after they're captured? I can't be the only one. After all, this makeshift prison happens to be one of the biggest plotholes on The Flash. We've seen Hartley Rathaway, aka the Piped Piper, manipulate his way out thanks to the perfect amount of leverage, but what about these other villains? How long can Barry Allen and his team keep these metahumans imprisoned? This is a plot hole that desperately needs to be addressed and I wouldn't be surprised to see the metahumans being taken to a legitimate prison or finding their own way out. After all, there are far too many unanswered questions. Who is feeding the metahumans? Where do they sleep? How do they go to the bathroom? How is it fair that all of them are imprisoned in this same facility?

The issues with the prison under S.T.A.R. Labs became more apparent during the Feb. 3 episode of The Flash, "Crazy for You." We were introduced to Shawna Baez, a metahuman with the ability to teleport that comic fans know as Peek-a-Boo. In the comics they did actually address how The Flash (though the Wally West version) mistreated and misjudged Peek-a-Boo. Shawna's crime seems to be trusting a scumbag boyfriend and helping him out with his crimes more than anything else.

If she was taken to court and convicted, she wouldn't have the same sentence as Kyle Nimbus, the metahuman who could form into gasses and meticulously killed multiple people. Sometimes it's hard to look at Barry Allen and "Team Flash" as heroes. Considering what they actually do with the metahumans, a real prison would be more humane. Not only do they indiscriminately imprison metahumans despite their crimes, they also gloat while doing so. Of course, a real prison would need a lot of help to pull off keeping metahumans there.

On a great Reddit thread, soulafein82 echoes a theory I've been thinking about in terms of solving the imprisonment of metahumans on The Flash , "The only way I can see them resolving this is to have all the metahumans break out near the end of the season and change the game up a bit to where a better facility can be found for them," they wrote.

User Roook36 elaborates on the issues of this plot later in the Reddit thread.

I was kind of on board with murderers because it is the only thing they can do right now about them. Peek-a-boo was a criminal but only for her boyfriend...Now that he ditched her they could probably rehabilitate her and make her an important member of the team. But she's just classified as a metahuman and dumped into a tiny cell with no privacy or even a chair (what's she gonna do with a chair?). Unless they are letting them out for food and to use the bathroom it's pretty awful.

I agree it would be awesome if Team Flash found a way to rehabilitate Shawna and make her a part of their team. Having someone who can teleport would be super useful.

In DC comics, Iron Heights actually does house the metahumans. They're notoriously not treated well, but it would definitely be better than the ridiculously small glass cell they're given at S.T.A.R. Labs. The only reason why the real Iron Heights isn't able to house metahumans is because officials have just found out about their existence and The Flash seems content with completely ignoring this huge plothole. Reversing the mutations of the metahumans doesn't solve this problem either. Many of them, like Kyle Nimble, are murderers who need to be put on trial, whether they have powers or not.

Since The Flash has been capturing these metahumans, another issue arises as there are now several technically unsolved crimes in Central City, including murders. Sure, Detective Joe West now knows what's up and The Flash is now more than an urban legend. But for the cases that involved metahumans killing or harming people, was justice really found? Aren't those cases technically still open? What about justice for the family members of people who have no idea what really happened?

There has been no mention of what to do with the metahumans as Barry's career as a superhero continues. One thing is certain, the show needs to fix this plothole. Hopefully, my theory that we'll see multiple metahumans breakout will force The Flash to address this issue.