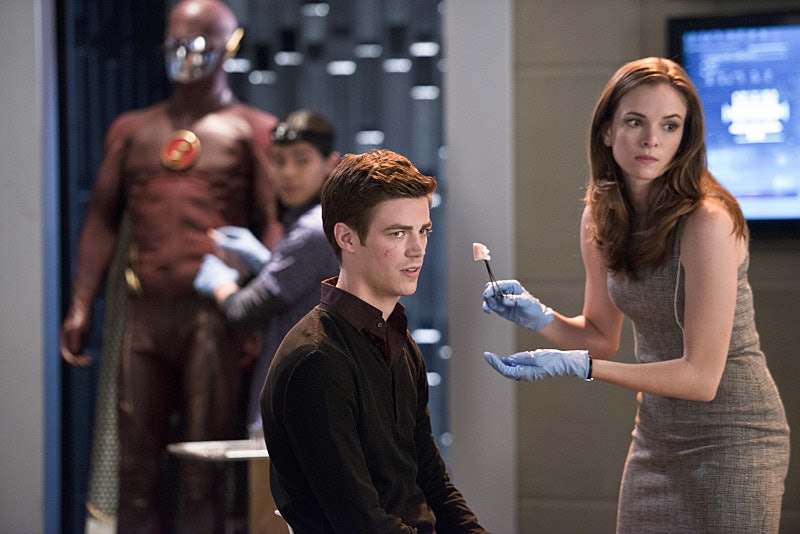 I love an origin story. Tuesday night's premiere of The Flash showed how Barry Allen got his super speed powers. Barry, played by certified cutie Grant Gustin, has come a long way since he first appeared on Arrow as a bumbling forensic scientist who instantly connected with Felicity and gawked over Oliver Queen (don't blame him). After being struck by a lightning bolt in an ominous storm, he fell into a coma and woke up months later in a lab. The lab in question was S.T.A.R. Labs, whose particle accelerator activated and unleashed a whole bunch of nasty into the atmosphere. It created "meta humans," as Dr. Wells puts it. Harrison is already suspicious with his secret lair and future news app. He and his team at S.T.A.R. Labs were nonplussed that Barry had powers and want to study him. What else did this storm unleash?

Now, the Barry Allen of the comic books was struck by lighting and chemicals and that's what created his powers. There were chemicals in Barry's forensics lab, sure. But it appears that The CW series may have strayed from the comics already. It looks like the particle accelerator created a whole "wide world of weird," as Eddie Thawne put it. Tiny observation: if you remember from last season's episode of Arrow, Barry told Felicity that he wasn't at S.T.A.R. Labs watching the particle accelerator because the line was too long, not that he was chasing a common criminal. Was he just being nice? Regardless, a hero is born. But how?

In a touching cameo from Green Arrow himself, Queen posits that the lighting chose Barry instead of just striking him randomly. Is this the case? What do we know about the storm? We know that liquid rose out of its containers and suspended in the air. This also happened just before Barry Allen's mom was murdered in the flashback. I think this is crucial. Whatever killed Barry's mom had to have gotten their powers in the accident as well, just as Barry mused to Wells. Since his fascination with clearing his father's name led him to Wells and the particle accelerator in the first place — could he have been involved as well? There are so many questions already!