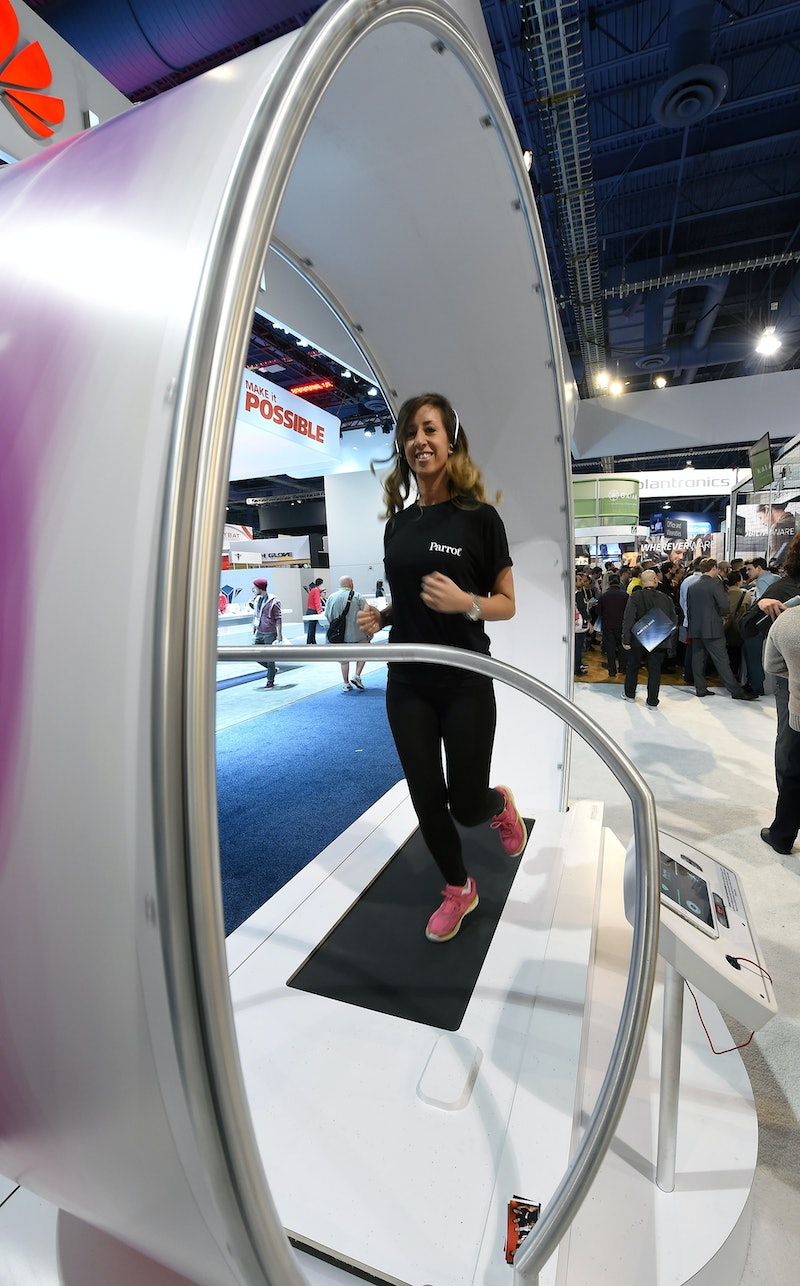 Much has been made recently about the benefits of non-traditional desks — but do treadmill desks really work? Can replacing your regular office work surface with one attached to a treadmill actually help keep you healthier? Will it fill your world with wonderful, fitness-related rainbows, wake you up each morning with adorable puppy cuddles, and solve all your problems for you? OK, so maybe those last suggestions wouldn't happen even in the best case scenario... but unfortunately, neither will any of the others, either. According to a new study from Oregon State University, treadmill desks aren't actually that effective — or at least, not in the way most of us probably hoped they were: They will probably make you walk a little more than you would without them, mitigating that whole "sitting too much might kill you!" concern; but they won't reverse the effects of a hitherto less-than-healthy lifestyle.

The sample for this one is a little small — only 41 people — and all the participants came from the same company; as such, I feel like this kind of puts us in a “do with it what you will” situation. A larger study with participants from a variety of different companies and workplaces might give us a better idea of the bigger picture. It's still worth looking at, though — at the very least, it can help us figure out how to get the most out of treadmill desks if we decide to invest in them — so here are the details:

The participants for the study were 41 overweight and obese people who worked desk jobs. 21 of them were randomly assigned to a group using shared treadmill desks; the other 20 were part of a control group using regular desks. It's probably worth noting that the group assigned to the treadmill desks didn't use them all the time; they signed up for specific slots.

The members of the treadmill desk group did walk more than the control group by about 1,600 steps, or roughly three-quarters of a mile, daily; however, using treadmill desk over 12 weeks didn't result in any weight loss or changes in body mass index scores (putting aside for a moment the fact that the BMI is an imperfect measure of health).

Sooooo, yeah: The way most people would likely use a treadmill desk probably wouldn't be enough to count as a full-blown workout. I can't exactly say I'm surprised by the results — I mean, I can't be the only person who has a hard enough time walking while talking on the phone, let alone walking while typing on a computer, right? — but it's hard to ignore the fact that the pros of the devices may not outweigh the cons (namely, the expense of ordering a fleet of them, installing them in the office, maintaining them, and so on).

It's probably worth noting that the workers only used the treadmill about half the time they were supposed to; according to lead researcher John Schuna Jr., they logged one 45-minute session on it each day instead of two. If they had used it in the way they were meant to, the results may have had a more positive slant to them. I imagine if you already live a relatively healthy lifestyle, a treadmill desk might be a nice addition; it's not, however, going to whip you into shape the same way a well-balanced diet and a regular workout routine will.

But While We're On the Subject...

But hey, at least the news isn't all bad; researchers behind a different study think that treadmill desks might actually make you smarter. As Engadget noted, it's probably best to take it with a grain of salt — the sample size is tiny — but for what it's worth, here's how the second study, which was published in Computers in Human Behavior , went down:

18 students from the Montreal area were divided into two groups: Nine to the treadmill desk group, and nine to the control group. Each group was asked to read some text and answer a few emails; the treadmill desk group did it while (duh) walking on their devices, and the control group did it while sitting at regular desks. After they completed these tasks, all the participants were given a 10-minute break. When they returned, they were each hooked up to EEG machines and asked questions about the texts and emails with which they had previously dealt. The researchers found that the treadmill desk group were 34.9 percent more likely to answer their questions correctly; furthermore, they believed they had been more attentive throughout the whole experiment, a claim which the EEG readings supported.

Again, though, we're talking about a group of 18 students; that's far too small a number from which to draw wide-reaching conclusions. Further research might attempt to explore this study's findings on larger scale, though — if other research teams find the same phenomenon occurring in a larger group of people, I might be more inclined to believe it. After all, knowledge is power, right?