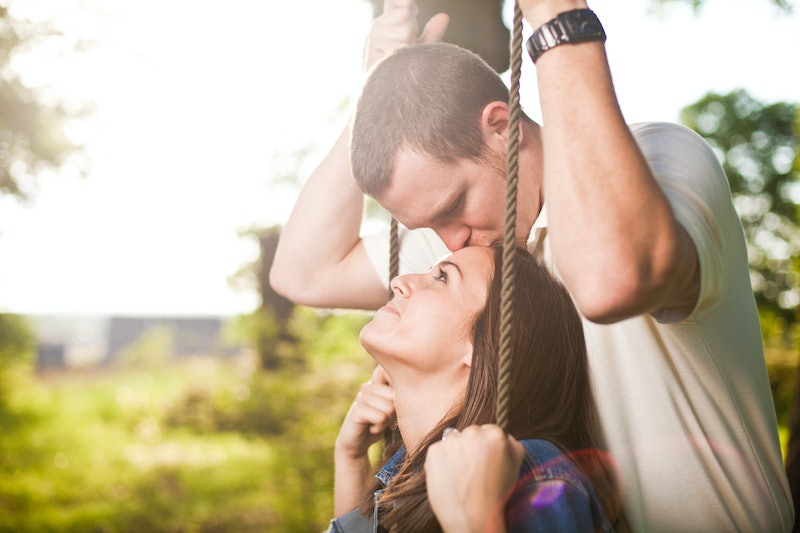 What do coupon codes and relationships have in common? I have no idea, but that didn't stop the folks at CouponCodesPro.com from creating a survey to shed some light on a number of milestones in the average American couple's life — everything from how long most couples wait to get engaged, to who popped the question, and more. So next time your mom/grandma/other relative who just doesn't get it starts harping on you for daring to be 23 and unmarried (you know who you are, nosy relatives of mine), just send them here! If this doesn't make for great dinner conversation, I don't know what will.

After CouponCodesPro.com started noticing an increase in the number of people searching for discounts on engagement rings, the company decided to conduct a survey, collecting answers from 3,720 American citizens. I've broken down the most interesting findings from the survey (so you don't have to!). Take a look below.

1. The average couple (who participated in this survey, anyway) gets engaged about three years into their relationship

The exact number was three years, seven months, and 14 days in (counting down, much?). So now you know the precise point in your relationship when you need to start blasting "Single Ladies" at all hours of the day to see if your SO will get the hint.

2. 88 percent of the time, the man was the one who popped the question

:( Way to conform to traditional gender roles, everybody. Although, to be fair I guess, it doesn't specify whether or not all the couples were heterosexual. Props to the 12 percent of ladies who popped the question, though. I admire your ability to laugh in the face of rejection. Teach me your ways.

3. Only 32 percent of participants described their proposal as a romantic occasion

Uhh...what? How could you devise a proposal that's not even romantic? YOU HAVE ONE JOB!

4. 47 percent of people get married two years after their engagement

So don't become a bridezilla because two years is a long time to continually piss off your closest friends and family. Also, could you imagine being perpetually stressed out for two years?! Take a chill pill. You have plenty of time to plan your wedding.

5. 64 percent of people who got divorced said it was because they got married too soon

Ouch. For the record, of all the survey respondents, eight percent got divorced, which is a whooooole lot less than the national average, so that's good, I guess? But still...if the average three years is still too soon, then what am I supposed to do with all this conflicting information? Who can I trust?!

In all seriousness, don't freak out about these statistics because a) they don't have from the most legit of sources and b) at the end of the day, it's better to wait too long than rush into a relationship, and that goes double for marriage. And that is what I will tell the next person who asks. So there. You can't hold me down!