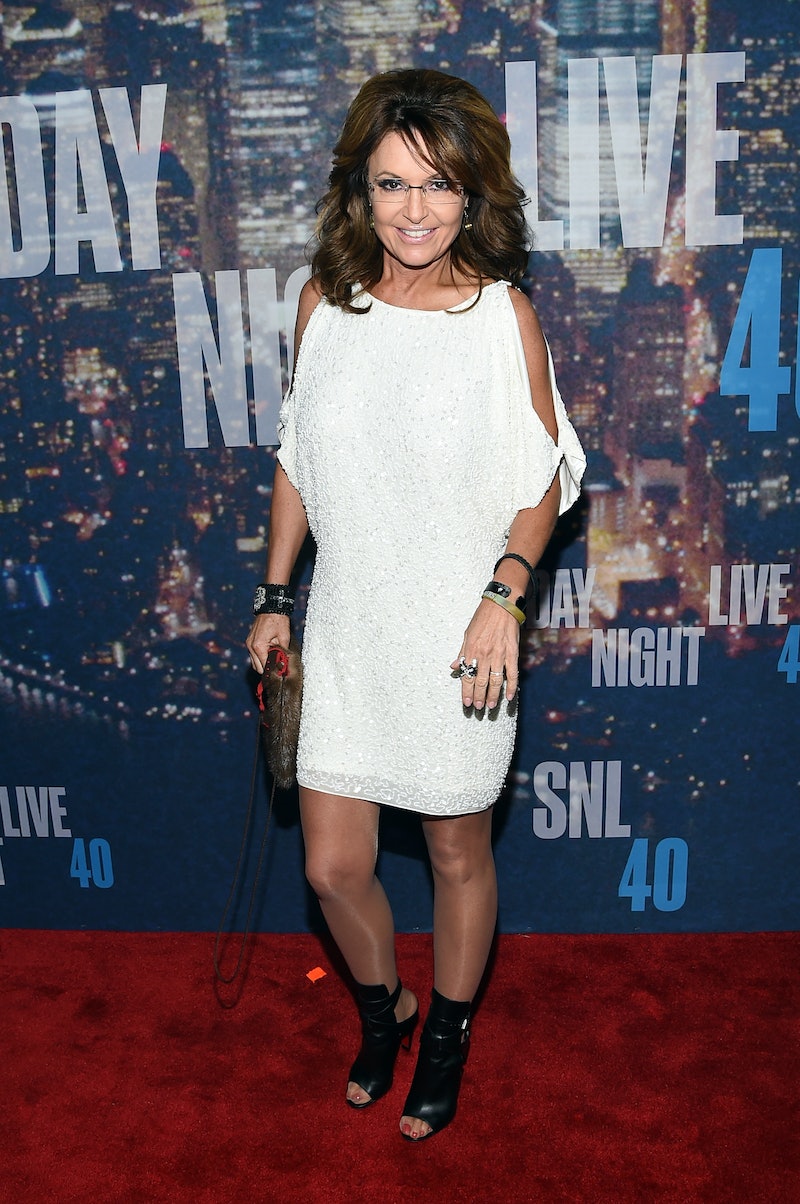 Sarah Palin stopped by the SNL 40 event over the weekend, and if you think about that for a second, that's actually pretty awesome. SNL and the always amazing Tina Fey are known for impersonating and poking fun at Palin over the years and being really, really good at it. Palin has been part of SNL episodes that parodied her in the past, which is awesome in itself, but given that some of the jokes about her were some of the most memorable in the show's history and she still chose to show up to SNL 40, well, that's especially fantastic. She's cool with being made fun of and I mean, hey, what's not to respect about that? Taking yourself too seriously is pretty boring. And what did she wear to the event? A sparkly white mini dress. Why not? But the best part was that Sarah Palin borrowed the dress from Bristol, her 24-year-old daughter.

OK, so maybe Sarah Palin and I don't have a similar sense of style. She's more... borrowing from her 24-year-old daughter's closet and adding a pair of reading glasses and I'm more... not... doing that. But, hey, she looks pretty good — you have to admit that no matter what your style (and political persuasion). The white dress, which Bristol originally wore to the 2011 White House Correspondent's Association Dinner, isn't age appropriate, really — but what does 'age appropriate' even mean? If Palin felt good in it, then let her wear a sequin-covered white mini dress. It's an SNL red carpet after all. I think anything goes.

And here's another shot of Sarah Palin rocking the same frock.

Like mother, like daughter never seemed so accurate, right? Whether you're into the dress or not, here's something to think on before you judge too harshly: It says a lot that Bristol would not only lend her mom the dress, but that she would feel comfortable with her mom wearing it on a nationally-broadcast red carpet. Some daughters may have been embarrassed or reminded their mothers that the dress is "too young for them," but Bristol clearly just went with it. This is evidence of a pretty close bond, I think — and that in itself is a wonderful thing.