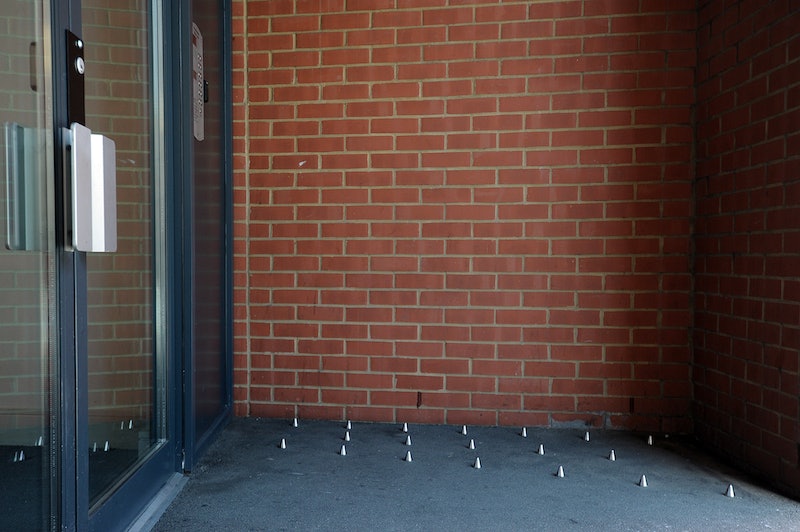 As if the hard concrete wasn't uncomfortable enough, now businesses are installing metal spikes to keep homeless people from sleeping outside near their buildings. Selfridges, a department store in Manchester, England's city center, put shiny, hard new spikes on the ledge outside of an entrance to the store and claimed that the spikes were meant to keep away cigarette smokers and litter. I'm saying "yeah, right" on that one.

If the spikes were installed to deter smoking and littering, then they weren't exactly well planned. It might keep people from sitting on the ledge to smoke, but people are still quite capable of standing while smoking, and a few spikes definitely won't stop people from dropping trash. The spikes were clearly installed to keep the homeless from sleeping on the bench-like ledge. Passersby in Manchester were understandably appalled when they walked by the department store and noticed the new addition.

This isn't the first time this has happened in the U.K. either. In July, a luxury apartment building in London installed spikes in an alcove outside the building to keep homeless people from sleeping there. The spikes were removed after a Change.org petition collected more than 130,000 signatures.

A similar petition has started for Selfridges to remove their spikes, and it already has more than 3,000 signatures. A music and book store in Montreal also tried installing anti-loitering spikes in front of their store last year, but the mayor had them removed. Spikes and other anti-homeless devices are popping up in cities all over the world, as businesses increasingly want to keep their storefronts homeless-free.

Instead of helping people that need a place to sleep at night, big businesses are making matters worse. Luckily, some people and places, including the Vatican, are looking out for the homeless. Pope Francis recently had showers and a barbers booth built near St. Peter's Square for the homeless to use for free. There are also artists and nonprofits across the U.S. building tiny, portable houses for the homeless, giving them a place to sleep, shower, and keep their belongings.

It's time businesses start viewing the homeless population as individuals who need help rather than a nuisance. Installing spikes outside a store does nothing to help the overarching problem; it only exacerbates it. As a high-end department store, Selfridges has the money and resources to aid the homeless rather than shoo them away.