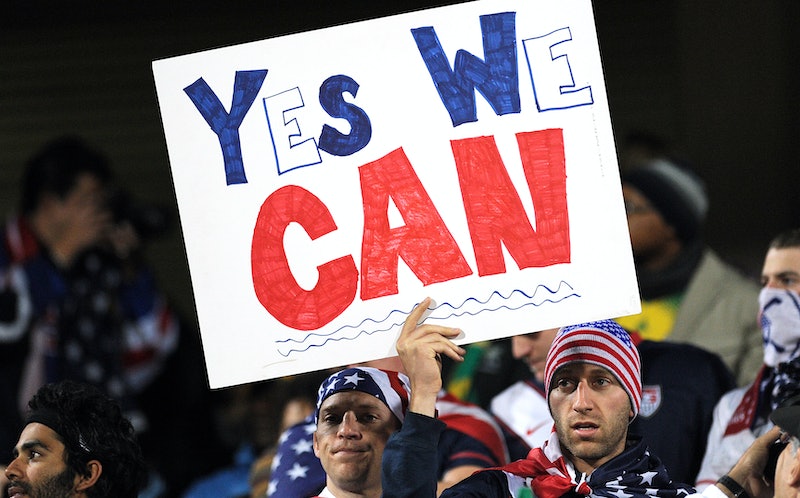 Barack Obama's presidential win in 2008 was a historical moment for the country, and much praise is due to his partnership with David Axelrod, his election (and then 2012 re-election) campaign adviser. Perhaps one of the most important people in Obama's career, Axelrod is highly credited with the nation electing its first ever black president. Although no longer a part of the political scene, Axelrod's recently-published memoir, Believer: My Forty Years in Politics, recalls some juicy bits about both Obama's campaign and his White House administration — chief among them that the famous campaign rallying cry might have never seen the light of day, because Obama thought "Yes, We Can" might be too corny.

I know. Had he actually went ahead with that sentiment, the nation would have been deprived of the profound slogan that carried the wave of Obama's message of change. In an interview with the New York Times Magazine about his book, Axelrod told Amy Chozick that it came close to happening — until Michelle (thank the Lord for Michelle) stepped in and reassured Obama. Axelrod said:

Michelle just happened to come by for the first ad shoot, and that was the ad that closed with the line “Yes we can.” He read through the script once, and after the first take he said, “Gee, is that too corny?” I explained why I thought it was a great tagline, and he turned to Michelle and said, “What do you think?” She just slowly shook her head from side to side and said, “Not corny.” Thank God she was there that day.

Then a fresh-faced senator, Obama's "Yes We Can" — incidentally coined by Axelrod himself — and "Change We Can Believe In" slogans were in stark contrast to his 2008 GOP rival's. Sen. John McCain's "Country First" slogan invoked a military spirit during a time when war-weary Americans, tired of their involvement in Iraq and Afghanistan, were more drawn to a message of hope and change.

Among other things, Chozick brought up Obama's perceived lack of pleasure from holding the presidency — what with the monumental expectations from his 2008 victory that left many of his most ardent supporters disappointed and a stubborn GOP that now dominates Congress — at least not as much as some of his predecessors. Indicative of his political dexterity, Axelrod's response dodged an outright confirmation but at the same time hinted his agreement:

I think he relishes the opportunity to be president, but he doesn’t define himself by being the president. Before he ran, I didn’t think he was pathological enough to subject himself to what was required, because he didn’t need to be president. And he agreed with me. When he walks out of that building, I don’t think he’s gonna look back. I think he’s perfectly happy to just be Barack Obama.

[T]here was this expectation that if Obama got elected, the whole world would change overnight and that political combatants would drop their arms and hold hands and sing “Kumbaya” and we’d all march forward together as one big happy family. That was never in the cards.